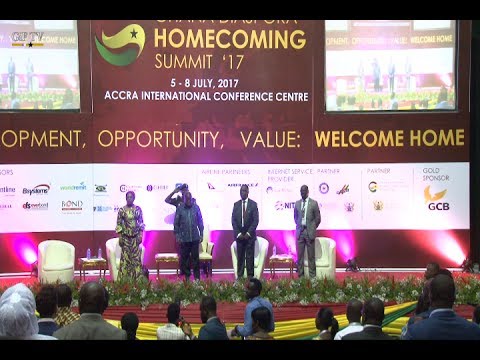 Ghanaians in the diaspora who were in attendance at the just ended Ghana Diaspora Home Coming Summit have lauded the government for organizing the event.

The three-day summit which brought together Ghanaians from all over the world was aimed at mobilising and harnessing the resources and skills of the diaspora community to accelerate development.

Speaking to www.ghanaweb.com after the program, the participants commended the government for organizing a program which recognize them and also expressed satisfaction with how the 3-day event panned out.

The participants asserted that the summit met their expectations and also provided an opportunity for them to have fruitful discourse with the nation’s leaders on how to move the country forward.

They also urged the government to make use of the ideas that were generated at the summit and promised to serve as watchdogs for the country.

‘It was an opportunity for the diasporans to take advantage of the new birth in the country to tap into how we can develop our country. Everything was addressed and it now up to us (participants) to make use of what we were told here”, one participant said.

Another participant called on Ghanaians home and those abroad to join forces and collectively seek the progress of the nation.

“There seem to be this notion that Ghanaians abroad are competing with those back home and that is unfortunate. We are all looking for the progress of this country and must be seen as development partners rather than competitors.

Others also called on the government to put in place measures to end brain drain so that highly skilled Ghanaians will stay in the country and serve as tools for development.