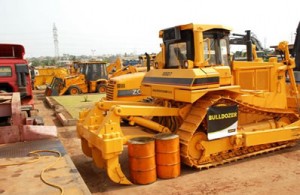 Contractors whose payment has been in arrears from last year after executing projects on behalf of the state have been relieved of their frustration with the release of GHÂ¢160 million by the government to clear the arrears.The Minister of Finance and Economic Planning, Dr Kwabena Duffuor, has consequently asked the 25 contractors, most of them local ones, to come for their release letters on Monday, January 18, 2010 to be presented to the Controller and Accountant General for payment to be effected. This payment means a lot for the domestic economy, as it will help the contractors to meet their obligations to their creditors, mainly the financial institutions, and enable them to continue with more projects to create jobs.

At a meeting with contractors in Accra Monday, the Finance Minister said the swift payment had become necessary because of the importance the government attached to infrastructural development, as espoused in the 2010 Budget Statement.â€œWe want to move the economy forward quickly and we want to try as much as possible to make an impact on the road sector, which includes city, urban and feeder roads,â€ Dr Duffuor stated. The 2010 Budget basically hinges on infrastructural development to create jobs and bring about economic transformation.Consequently, the minister said the government sympathises with the frustration of contractors who took contracts for which resources were not available. The huge arrears owed contractors are having a ripple effect on many sectors of the economy. First, the banks to whom the contractors are heavily indebted to have started making provisions for bad and doubtful debts, which will translate into lower profits and taxes and consequently lower employment and a contraction in the economy.Dr Duffuor said the government was doing everything possible to clear all the road sector arrears pertaining to the consolidated Fund to pave the way for more infrastructural projects to take off this year. He also called for partnership with the contractors to resolve all outstanding contractors to resolve all outstanding issues and difficulties to advance the cause of infrastructural development in the country.The government spelt out a strategy in 2010 Budget to liquidate the arrears. They include various domestic sources, coupled with development partners lending. The present funding is entirely from domestic borrowing, with some budgetary allocation, and forms part of the execution of the 2010 Budget.The contractors welcomed the governmentâ€™s decision to liquidate the arrears and appealed to it to also look at other arrears relating to contracts awarded from the Road Fund.Dr Duffuor assured them that the issue would be tackled at his subsequent meeting with the contractors in the spirit of partnership to move the economy forward.The President of the Progressive Contractors Association, Mr Michael Aidoo, thanked the government for understanding their plight but indicated that arrears relating to the road Fund were equally important and should be dealt with immediately.Mr Aidoo, whose company, Big Aidoo, has been awarded the contract to construct the Teshie portion of the Accra-Tema Beach Road, called on the government to look at ways of liquidating arrears pertaining to the Road Fund, since they covered many of the local contractors.The appropriation of that fund was also very important, he said, due to the large portion devoted to road maintenance and the construction of feeder roads. While backing increases in road tolls and other such measures that would increase inflows into the Road Fund, Mr Aidoo urged mangers of the fund to be disciplined and award contracts for projects only when there were funds.