Ghana boasts big names in the professional boxing arena, with names such as Azumah Nelson, and Ike Quartey who placed their nation on the global map with their exploits on the ring. These are boxers who enjoyed successful years in their threshold, and today they remain some of Ghana’s most revered sportsmen alongside other names in other sports. Boxing is not the most popular sport in Ghana or Africa, but it is a field that Ghanaians remain passionate about to this date, and it is included in the Betway Ghana online sports betting.

From the man who funded the government single-handedly, to the little-known boxers who conquered the world at their prime, we take a look at ten amazing facts you probably didn’t know about Ghana’s crème de la crème.

#1. Roy Ankrah was Ghana’s first professional boxer
Nicknamed the Black Flash, Roy Ankrah can be said to be the man who paved the way for his country-mates in the late 1940s and early 1950s. He is documented as the first boxer from Ghana to secure International recognition after winning the British Empire Super Featherweight title.

#2. Clement Quartey won Ghana her first Olympic Medal
He lives in the shadows of his brother Ike, but he was the first boxer to clinch an Olympic medal after securing a silver medal in Rome in 1960. He took part in the men’s light welterweight category. He thrived during bad periods when companies were not available to facilitate sponsorships.

#3. Joseph Agbeko is the new king of the ring
Little known Joseph Agbeko floored much-fancied Luiz Alberto Perez in the IBF Bantamweight title in 2007 and went on to defeat Johnny Perez to the same title in 2011, bringing back the cheers to Ghanaians after a trophy drought.

#5. Ghana kept the World Boxing title for three consecutive years
Thanks to Azumah Nelson, also known as Professor, the WBC crown stayed in Ghana for three years, between 1984 and 1986.

#7. Find Bukom Banku in the studio
Ghanaians know Bukom Banku for his exploits in the ring as well as his talent in music. He has taken part in several hyped fights and has featured in several hits as well. Call him a Jack of all
trades.

#8. D.K Poison once loaned the government
Too fictitious to be true, but believe it or not, in 1976, World Champion D.K Poison loaned $45,000 to the government of Ghana to buy food for its citizens in a year when the country was experiencing an economic melt-down.

#9. Joshua Clottey inspires amateur boxers
When Joshua Clottey won the IBF Welterweight title in Las Vegas, he could just have awoken a sleeping giant. A new generation of fighters is strongly coming up. Betway has registered a renewed interest in the sport in recent times.

#10. Bukom is the home of World Champions
Did you know, Bukom has produced over five world boxing champions? No other region in the whole of Ghana has produced more winners, including the Capital, Accra. 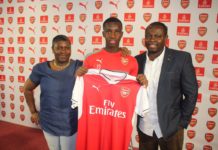