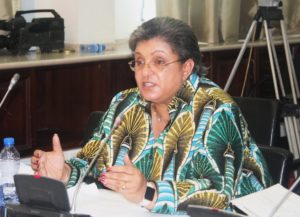 The Minister of Foreign Affairs, Ms Hanna Serwaa Tetteh, made the disclosure when she appeared before the Public Accounts Committee (PAC) of Parliament yesterday.

She said the agencies took commission from their partners in the Gulf Region, in addition to the money they took from their victims, mainly women.

Ms Tetteh said the people recruited and taken to the Gulf Region experienced many difficulties and ultimately it became the responsibility of the Ghana government to cater for their return journey from countries such as the United Arab Emirates, Kuwait and the Kingdom of Saudi Arabia.

She said only 22 recruitment agencies were duly registered in the country.

She was answering questions in respect of the 2011, 2012 and 2013 Auditor General’s reports on the Ministry of Foreign Affairs.

According to the 2013 report, the government spent $5,839.87 on the repatriation of some Ghanaian footballers who were stranded in Tehran, Iran, between July and August that year.

The Ghanaians were taken to Tehran by a Ghanaian football agent, Mr Isaac Adomako, on the pretext of getting them professional football contracts in that country.

Ms Tetteh said if the Ghanaians had overstayed in Tehran, they would have been detained, hence the decision of the government to pay for their return trip.

The minister told the PAC that all attempts to retrieve the money from the agent had proved futile.

The PAC said the suffering experienced by young Ghanaian women in the Gulf Region was a matter of concern and, therefore, underscored the need for the government to take the necessary steps to stop the operations of the fake recruitment agencies.

The PAC asked the Ministry of Foreign Affairs to report Mr Adomako to the police for prosecution and retrieval of the money.