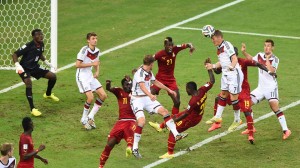 Ghana’s assistant coach Maxwell Konadu says the team is determined not to concede in their final group game of the 2014 World Cup against Portugal on Thursday.

The Black Stars have already shipped in four goals – more than what they conceded for their whole campaign four years ago in South Africa.

Ghana remain winless in the tournament being staged in Brazil but are still in with a chance to qualify from Group G.

They will however need to beat Portugal comprehensively while hoping Germany does the job on the USA in the other group game in order to go through.

The Black Stars’ defensive vulnerability has however been a major source of worry for many.

But assistant coach Maxwell Konadu insists the team is working extremly hard to stregthen their rear, starting from Thursday’s crucial game against Portugal.

“We are working very hard not to concede – at least against Portugal we don’t concede,” he said.

“When we meet Portugal, we are working very hard not to concede.