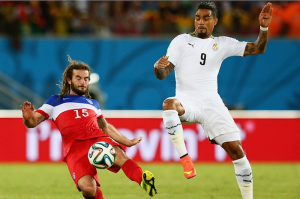 Boateng admitted he was surprised to be left out of the starting line-up in their 2-1 defeat in Natal in their Group G opener.

He came on in the 59th minute to replace Jordan Ayew and helped the Black Stars level the scoring through Andre Ayew on 82 minutes.

But Ghana were undone by a late John Brooks header after 86 minutes to hand the Yanks their first ever win over Ghana in international football.

“I am surprised I did not start yes, I know that you always start with your strong team but may be the Coach had a different idea,” the Schalke 04 playmaker told the media after the match.

Boateng is expected to start in Ghana next match against Germany-his country of birth-on Saturday.

Ghana must win that match or face early elimination from the tournament.