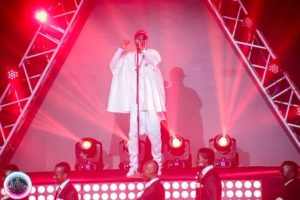 Artiste of the Year at the just ended Vodafone Ghana Music Awards (VGMA), Elorm Adablah popularly known as EL says he should have won Best Rapper this year.

The artiste, who won five awards on the night, said he should have won the Best Rapper of the Year not Sarkodie.

He said this in an exclusive interview on ‘The Profiler’ show on Hitz FM.

According to him, the award should have gone to him or R2bees’ ‘Paedae’, also known as Omar Sterling.

“Best Rapper Of The Year award should have gone to either Paedae or myself. I honestly thought that award was going to either me or Paedae,” he said.

He noted that, Paedae’s ‘Nineteen Ninety’ song was a great song and should have earned him an award.

“When his ‘Nineteen Ninety’ track dropped it was wild fire. I just felt it could have swung our way,” he said.

EL, nevertheless, called Sarkodie a talented artiste. “I just felt it could have swung our way but that doesn’t take away from the genius artiste Sarkodie.”