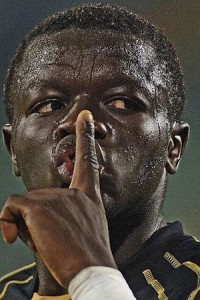 English side Liverpool are being linked withÂ Inter Milan‘sGhanaian midfielder Sulley Muntari.Â The Daily Mail says Liverpool considered an approach for the 24-year-old in January.

ButÂ they are expected to revive their bid for Muntari as a replacement for Xabi Alonso, who has been linked with Real Madrid.

Liverpool made the approach in January when Juventus and Arsenal enquired about Xabi Alonso, and may make another move should Alonso leave.