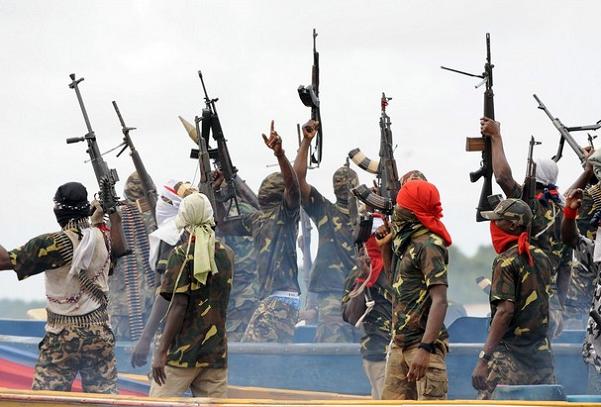 GHANA NEWS – Ghanaâ€™s oil find if not properly managed could spell crisis comparable to what is happening in Nigeriaâ€™s restive Niger Delta region.

A respected legal practitioner and lecturer at the University of Ghana, Law Faculty, Dr. Raymond Atuguba has chillingly revealed that militants in the Niger Delta region, notorious for blowing up oil pipes, kidnapping and demanding huge ransoms and causing unrest in the oil rich Nigerian region have started tripping to Ghana in droves.

Militant groups in the Niger Delta employ abduction of expatriate oil workers and the destruction of oil production facilities to back their demands for a larger say on the exploitation of oil deposits in the region. Nigeria relies on oil exports from the Niger Delta for more than 90 per cent of its total annual revenue.

Dr. Atuguba in an interview on the Citi Breakfast Show on Wednesday said the essence of militants’ interest in Ghana is to mentor folks in the Western Region of Ghana, on whose offshore, the country will be drilling oil to be protective of their interest.

He said, when he visited the Western region a few weeks ago, he discovered that â€œgroups there were already creating linkages with groups in the Niger Deltaâ€. According to him, the people were â€œpreparing to create the same amount of chaos we have in the Niger Delta if we neglect their concerns.â€

Dr. Atuguba stopped short of stating the exact â€˜lessonsâ€™ the Ghanaians could be taking from the â€˜visitingâ€™ militants, but said people were preparing to protect their interest. He remarked that if the security agencies were on their toes, they would have noticed the movement of arms.

Dr. Atuguba is of the view that the culture and livelihood of the people located at the coast of the region will be greatly affected due to the infiltration of various forms of social vices the region will have to embrace.

Dr. Raymond Atuguba who is also the director of the Law and Development Associates warned that it will be ghastly to ignore the concerns of those communities. â€œWe should not underestimate itâ€¦â€he advised.

Expressing his opinion on how to deal with the looming crisis, he is proposing a two-prong approach.

First, he thinks â€œgovernment needs to implement a strategy for keeping off pressure from the President. These oil companies are so big and powerful that they can get Obama to call Mills, they can get the Queen to call Mills.They can do everything.”

In the face of this, he believes government needs to draw a strategy for dealing with external pressures from companies working through other sovereign states or directly through their CEOs on government and forcing it to do things that otherwise government wouldnâ€™t have done.â€

He said, once that pressure is managed a technical team should be put together to design a plan for making the nation maximize gains from the oil industry. The gains he mentioned must be invested in critical social sectors that will move the country forward.