Five presidential candidates who took part in the December 7 presidential election have conceded defeat and congratulated their fellow candidate Nana Addo Dankwa Akufo-Addo of the New Patriotic Party for “winning” the race although the Electoral Commission is yet to announce the certified results.

It is left with President John Dramani Mahama, who is the candidate of the governing National Democratic Congress (NDC) to follow suit.

In the early hours of Thursday, 8 December, Dr Edward Mahama of the People’s National Convention (PNC) became the first to concede and congratulate Mr Akufo-Adddo stating on his tweeter handle that: “I will like to congratulate Nana Akufo-Addo of the NPP for winning the 2016 general elections based on my projections. I call on my other contenders to do same especially the sitting President to concede gracefully. This is a victory for all Ghana.”

Dr Papa Kwesi Nduom, the candidate of the Progressive People’s Party (PPP) followed suit through a statement saying: “I wish to congratulate Nana Addo Dankwa Akufo-Addo of the NPP for winning the 2016 presidential election based on results available to me. The wind of change has blown in his favor. The NPP worked hard for this victory. I accept the decision of the people on behalf of the PPP. We must all now work hard to make our country great and strong and the people prosperous.” 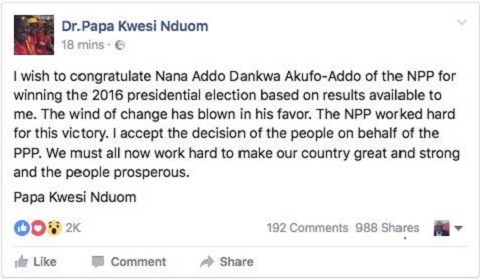 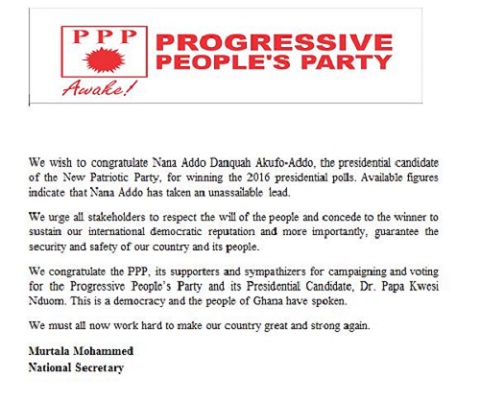 The only independent candidate, Jacob Osei Yeboah (JOY), also in a statement said: “The office of the Independent Presidential Candidate, Mr Jacob Osei Yeboah has been following keenly events over the past 24 hours. With preliminary results announced, I wish to concede defeat accordingly. Again, based on the results declared so far, I wish to congratulate the Presidential Candidate of the NPP, Nana Addo Dankwa Akuffo-Addo for taking a lead however marginal.

“Finally, I urge all and sundry to remain calm as we await on the EC to announce the certified results. The EC has so far done an excellent job with much improvement on 2012 voting processes. I believe they will vindicate the earlier commendations that have come their way by abiding truly to their own principles of transparency and fairness. I will plead and urge the supporters of NPP and NDC to remain calm and law abiding by allowing the EC to do its constitutionally mandated declaration of elections results. We look forward to a peaceful country and may God bless Ghana.”