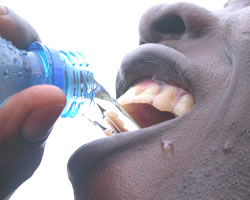 Government is working with a consortium of Chinese investors on a $500-million deal, to solve the Accra water supply deficit, Minister of Water Resources, Works and Housing, Mr Albert Abongo has announced.

Interacting with journalists in Sunyani at the weekend, Mr Abongo said the funding would help government to overcome the perennial water problems in the nation’s capital. The current water supply is estimated at 80 million gallons per day for both domestic and industrial use, which is half of the quantity needed. Mr Abongo said the national urban water shortfall stood at about 45 per cent.

He said the deal, which may take three to four years for completion would lead to the construction of Kpong Headworks to provide extra 40 million gallons a day. He said government was determined to see the completion of the on-going desalination plant, which would provide about four million gallons a day for residents of Teshie and Nungua, who are currently faced with crippling water shortages.

Mr Abongo said government was also pursuing the option of attracting investors to roll out other peri-urban and urban centres water treatment facilities. To ensure the sustainability of these projects, he said his ministry would keep Ghana Water Company Limited on its toes to ensure that managerial mistakes are checked.

Mr Abongo said the vision of the Mills administration was to rapidly increase water supply by improving existing capacity and overcoming the serious delivery challenges.

He said government was also determined to ensure that portable water was provided to all underserved rural communities within the next five years, in line with the attainment of the rural water segment of the Millennium Development Goals.

Mr Abongo said it was in this regard that government voted 30 million cedis for the provision of 1, 100 boreholes for rural communities during this fiscal year as a complement to the several others being provided by the Community Water and Sanitation Agency.

Touching on housing, he said his Ministry had created land banks and developed a framework under which public-private partnership projects would be rolled out to meet the estimated 500, 000 national housing arrears.

He said one of such collaboration had led to the contracting of Ago Resources, a housing firm to construct affordable houses on government plots near Amansaman in Accra. 19 Oct. 09