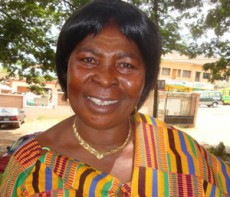 A 60-YEAR-OLD farmer at Affigya Kwabre in the Ashanti region, Madam Akua Donkor, will be contesting the 2012 presidential elections as an independent candidate.

She said at a press conference in Kumasi, whilst announcing her candidature, that failure on the part of both the NDC and NPP administrations to transform the country influenced her decision to contest the presidency and save Ghana.

Madam Donkor, who has never received any formal education, said the hardship in the country proved that better governance could not be provided by so-called scholars and graduates. â€œYou put your trust and faith in the people who went to the big universities and who could speak English like white men but they fail you miserably. Now try me who is an illiterate and I will not disappoint you,â€ she stated.

The former assembly member for Heman Electoral Area in the Affigya Keabre District said Ghanaians should entrust the governance of the country into her care in 2012, promising to deliver to their satisfaction.

She said she would seek wisdom from God, the creator of mankind, so as to lead Ghana from its current deplorable state to a country where wealth and happiness would be the order of the day.

Madam Donkor, who has the â€˜moonâ€™ as her symbol, said Ghana had been in darkness for far too long due to wrong leadership skills portrayed by both the NDC and NPP, adding that she would bring the country back into the light through exemplary leadership skills.

According to her, both the NDC and NPP had over the years distributed the national resources to their party members and embarked on big campaigns to retain political power without paying attention to the challenges facing the masses.

Madam Donkor, whose party goes by the name â€˜Obaatanpaâ€™, to wit good mother, said she would make sure that the national cake was evenly distributed for the benefit of every Ghanaian. When elected as the first female president of the country, she said she would immediately lift the taxes on the importation of goods to enable people to import more goods.

According to her, all the monies being collected at the harbour usually landed in the pockets of individuals recruited to man those places, at the detriment of the country. She noted that she would stop the canker by making Ghana a free port state.

She promised to use monies realized from the countryâ€™s natural resources such as gold, timber, manganese and bauxite to develop education and provide good health infrastructures for the people.

Madam Donkor observed that journalists, despite their good works of reporting about what happens in society, had been neglected by the past governments. However she stated that her administration would assist media work to flourish.

â€œI will provide every media institution in Ghana with a brand new car so that they could travel to every corner of the country to report about the challenges facing the country so that it could be addressed.â€

Asked if she had the financial wherewithal to embark on aggressive national campaign to win the presidency, Madam Dorkor answered in the affirmative, saying she was well prepared for the battle ahead.

Madam Donkor, who cannot speak English, said she would engage the services of a translator whenever she met foreign envoys, saying â€œeven lawyers hire secretaries so there is nothing wrong if I hire a translator.â€

As the assembly member for the Heman electoral area, Madam Akua Donkor used her own money to construct schools and provide potable drinking water. She even constructed water closet toilet facilities for the police at Mamponten, which was not part of her electoral area.