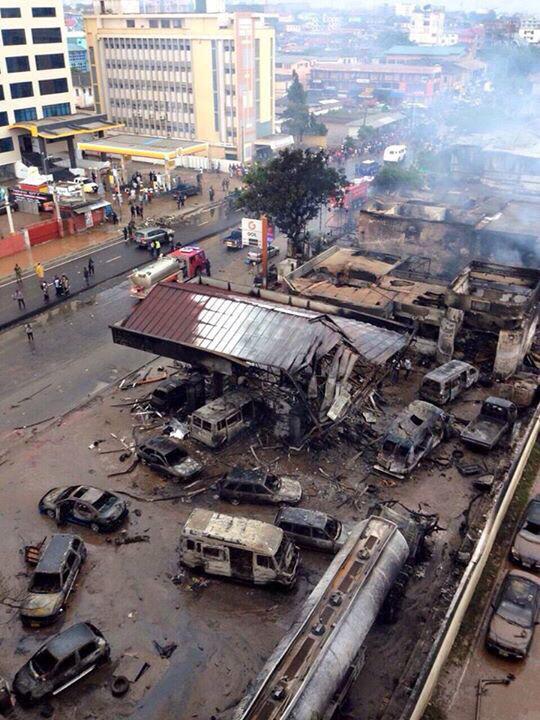 Over 95  dead bodies have been retrieved at the Goil Filling Station at the Nkrumah Circle in Accra that caught fire during Wednesday’s torrential rains.

The Ghana National Fire Service has confirmed that officially 95 people are dead and fears the number could rise as the salvage operation continues.

It is, however, unclear what sparked the inferno at the Service Station behind the GCB Towers and opposite the Vienna City night club.

Meanwhile, people helping the security services in the rescue operation are telling Starr News that about 96 charred bodies have been found.

Starr News’ Asabea Akornor who is at the scene reports that the police are still counting and bringing out the victims from their respective homes around the scene of the outbreak.

The inferno followed hours of heavy downpour in the capital that led to power outages in several communities.

Hundreds of workers in the capital have been left stranded at their work places as the heavy downpour submerges the city.

Most of the principal streets in Accra are flooded and unmotorable as commercial and private vehicles are trapped in the deluge which is above knee level.

Tables, chairs and broken stalls of sellers could be seen floating on the submerged streets, especially on the Ring Road and Nkrumah Circle.

Reports reaching Starrfmonline.com indicate that walls have collapsed at flood-prone areas like Awoshie, Santa Maria, Kwashiebu and Tabora and their surrounding areas and residents are struggling to evacuate their homes for safety.