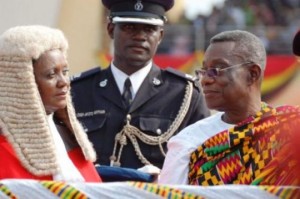 The Policy & Strategy Associates, Inc. survey, released Saturday March 14, also suggests that nearly 9 in 10 support the Presidentâ€™s decision to review the ex-gratia package that was approved in the final hours of the previous NPP government for MPs, the Former President and other public officials.

Among those who described themselves as â€œswingâ€ voters or preferred not to mention party affiliation, the president’s approval rating is 71 percent.

The survey also finds that, after two months in office, President Atta Millsâ€™ personal image is extremely strong. Overwhelming majorities view President Atta Mills as the â€œchangeâ€ agent (75%) and the â€œrightâ€ leader (77%), while an even higher percentage (93%) says he is trustworthy.

The survey’s release comes just over two months after President Atta Millsâ€™ inauguration. Fifty-five percent of those polled said President Atta Mills has so far met their â€œinitialâ€ expectations, and another 19 percent suggested that he’s exceeded their â€œinitialâ€ expectations. Nearly one in ten or 9 percent said that the president has fallen short of what they initially expected.

The Policy & Strategy Associates, Inc. poll was conducted by field researchers in Ghana from Saturday March 7, 2009 through Monday March 9, 2009 with 1,068 people of voting-age scientifically sampled. The survey’s sampling error is plus or minus 3 percentage points.

The Policy & Strategy Associates, Inc. national region-by-region pre-election poll published on November 15, 2008 predicted an Atta Mills win in a Report which opened with the statement: â€œthe NDC’s Atta Mills enters the final month of the Election 2008 Campaign in a very favourable position to be elected President of the Republic of Ghana, having made significant inroads on formerly NPP turf, while NPP candidate Nana Akufo-Addo plays competitive defence.â€ Post-election analyses of the actual results show that the predictions contained in the Report largely played out in the regions surveyed.