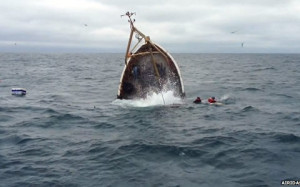 Eight members of a fishing crew are reported missing after their boat sunk within the Elmina-Cape Coast waters at dawn on Tuesday.The eight were part of a twenty-member team travelling from Sekondi to Tema for maintenance of the fishing boat when violent waves tossed the vessel around and sunk it.All twenty were knocked off the boat by the violent waves, but twelve were rescued subsequently.The Ghana Navy has dispatched fast rescue boats to search for the missing eight fishermen.Narrating the incident to Joy News, the Secretary of the Sekondi Branch of the Ghana Inshore Fisheries Association, Emmanuel Nii Botwey, said the twelve who survived were just lucky.He says most of the boats at the Bosomtwe Sam Fishing harbor, at Sekondi, where the sunken ship took off, are not sea-worthy.According to Nii Botwey, a few months earlier a boat almost sunk a few hours after it was put to water due to a leakage.He said lack of a space at the Sekondi Harbour for ships to dock for maintenance work is a major problem.Sekondi is a major fishing enclave in Ghana.