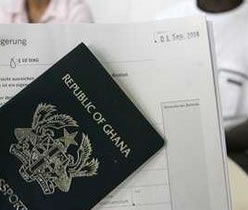 Perhaps you have heard about the way people who decide to seek greener pastures in Europe, America and other parts of the world far from their native lands are finding it tough to make ends meet but you do not want to accept it.

You had the opportunity to watch the documentary aired by CNN about how some people wereÂ  recruited from some west African countries and transported to United States of America only for them to be treated like slaves or captives but still thinks the story was untrue.

You are still not believing that life is getting more hard to live in overseas these days because when eating your fufu and Billy goat head soap in Ghana, all that you think about is landing on the white man’s land and starting to spend dollars.

Or you are disputing the fact that the economic recession that hit the developed countries from 2007 which seriously affected their economy making living condition hard has gone away therefore all that you dream about these days is seeing yourself walking on flurries, wearing winter hut and thick jacket going to work to also collect dollars so by all means you have to travel to overseas.

If this is your dream, then is better you start changing your mind and instead strife to develop your own life in Ghana because, â€œAbrokyereno Asaâ€ to wit,â€ no greener pastures in overseas countries.

There is nothing wrong for one to study the economic situation of his country of origin and take a decision of changing destination moving from that country to live in another country of his choice where he thinks life could be better lived.

But in plain and simple, these countries are stunned by the way immigrants are filling their country every minute and struggling to find work to do where there are no jobs therefore the need to tighten up their security system to prevent immigrants from entering.

As they are happy of changing destination to where life is expected to be better lived, they do not expect to meet the negatives but hey, that is the reality on the ground. Too much stress, employment layoffs, closure of companies that offer job opportunities to people and marginalization of newcomers will tear your heart apart and die or pick a chronic disease only for you to return to Ghana and struggle to cure it or succumb to it to eternal life.

A case in point is the story of a 22 year old Dilshod Marupov from Uzbekistan who dreamt of coming over to Canada to struggle to work hard and establish a decent life for his family but had his dream shuttered.

Last year, on December 24, he and his friends were pouring concrete to rehabilitate a fourteen floor apartment building when a scaffold that was supporting them caved in as they collapsed to the ground killing four of his colleague workers instantly.

He is now disabled and struggling to legalize his stay in Canada.

A research conducted has indicated that for hundreds of years, immigrant dream has always been: come to Canada work hard and eventually establish a decent life for your family.

But over the years, newcomers have found it more difficult to make ends meet as immigrant poverty is rising with precarious employment. More recently, numbers of undocumented and underground workers seem to be growing.

The fact is newcomers are taking longer to catch up to Canadian-born workers which has become a course for worry as many analysts says the low quality of jobs is keeping newcomers down, along with the fact that underground guest workers are probably competing for jobs against the immigrants of five years ago, pulling down wages for newcomers generally.

So with this is it not clear that there are no greener pastures anywhere for one to go and seek? One goes to seek greener pastures in a foreign land and return to his homeland to invest. Looking at job specifications if the government and for that matter the good people of Ghana will rise up and embark on industrialization less people will show interest in traveling to overseas.

Let us start doing something from now.