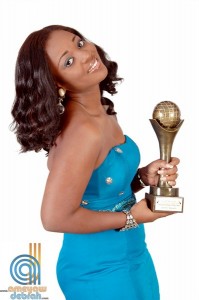 Ghanaian star actress, Jackie Appiah is certainly having a good year. She recently followed her African Movie Academy Awards (AMAA) nod for best actress in a lead role with the City People Entertainment Award for best Actress in Ghana. The award which celebrates movies, music and comedy was held on July 18 at the 10 Degrees Event Centre in Lagos, Nigeria.

Jackie who was nominated against the likes of Nadia Buari, Lydia Forson, Naa Ashorkor Mensah- Doku and Yvonne Nelson, says she didnâ€™t expect to win the award because she felt after winning the AMAA nod she wasnâ€™t going to win again.Â  She is however excited by the honour and she believes the other nominees were equally good.Â  â€œI am happy and proud that people have sat down to appreciate my work. This is the second award in the year; I give glory to God. I was competing with very good actresses, they are all equally good and so I felt that was a very tough category to win. I respect all of them because they are all good actresses, individuallyâ€.

The adorable actress was also nominated for Best Ghanaian movie personality but lost out to Juliet Ibrahim. She comments: â€œI have a beautiful personality but I cannot take home all the awards, someone else had to win some of the awards too. Juliet Ibrahim won the award and she is fantastic, she has a beautiful personality. So who else would they have given it to? I congratulate her, I am proud of her, she did a great jobâ€.

Jackie will soon shoot a horror movie tentatively titled, â€˜Graveyardâ€™ with Peace Films and directed by Pascal Amanfo. The actress says she canâ€™t wait to do the movie because she has never done a horror flick before. She also has another flick coming up with producer, Abdul Salam and according to the actress, it would be a blockbuster. She is impressed with the scripts for both movies and believes she will put up award winning performances in both.