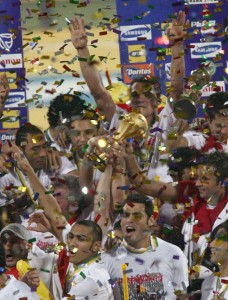 Luanda, Angola, Jan. 31, GNA – A gallant display from the Black Stars of Ghana was not enough to grant the ntion, the Continent’s most prized trophy at the finals of the 27th African Cup of Nations against the Pharaohs of Egypt on Sunday in Luanda, Angola.Â The Stars surprisingly lost by a lone goal in the dying embers of the game after a brief loss of concentration in defence, which saw the Egyptians running away with their seventh title while Ghana failed to win its fifth trophy after 28 years.

At the 11th November Stadium in Luanda, the two sides sold out a performance that befitted their status as the best two teams on the Continent at the end of the three-week soccer fiesta in the oil rich Angola. A fairly balanced output from the two sides after they struggled in the first 25 minutes of the game for dominance, especially in midfield saw the Ghanaians dominating afterwards with Anthony Annan, Agyemang Badu and Kwadwo Asamoah assuming firm control of affairs.

The Egyptians were for once reduced to an ordinary side contrary to pre- match predictions which favoured them ahead of the Ghanaian youthful side. With the midfield controlled by the Ghanaians, it became possible for the Stars to create a lot of anxious moments for the Egyptians with the likes of Andre Ayew, Asamoah Gyan and Opoku Agyemang beginning to invade the territory of the Egyptians and creating some scoring opportunities which, however, were wasted.

On the side of Black Stars, it was the first time they played an all attacking game in the competition as they pushed from all angles to find the opener but this did not prevent them from providing effective defence of their territory, which denied the Egyptians the opportunity to execute their free flowing game exhibited in earlier matches of the competition. It was during one of such raids that Ghana got a free kick at the edge of the Egyptian box but a perfect delivery from Kwadwo Asamoah was well dealt with by keeper El Hadary Essam in the 17th minute, which obviously was the brightest chance up that moment.

The Stars remained on top of the game till the 30th minute mark after which they allowed the Egyptians to take over but they were also unable to break the backline of the Ghanaians with Mohamed Zidan and Abdrabou Hosni making unsuccessful attempts at scoring.

It was once again a temporary dominance by the North Africans as the game assumed a balanced pattern with each side probing for the opener which never materialized.

The performance from the two sides was enough to keep the large crowd at the stadium applauding the players after the first half of the game even though there was no goal to set the stadium up after 45 minutes of action. A short-lived aggressive display from the defending champions in the second half, did not in anyway aid their penetration as the Stars responded with the same aggression sustaining the action that characterized proceedings in the first half.

It was again the Stars who won greater part of the midfield battle and succeed in having two free kicks which were wasted in the 52nd and 60th minutes with Gyan and Asamoah as the culprits.

The Egyptians could have scored the first goal in the 67th minute but Emad Abdelnaby failed to make a connection while a subsequent melee was of no significance.

Ghana continued to dictate the pace of the game and subjected the Egyptians to intense pressure by creating holes in their defence with Gyan and Ayew remaining regular tormentors of the North Africans with Asamoah providing the back-up arsenals.

In the 73rd minute, a free kick well delivered by Gyan was saved by the Egyptian Keeper and a minute later Samuel Inkoom’s cross glanced across the goal post with no connection.

From that moment there was a fast attack initiated by the Egyptians in the 85th minute that saw the only goal of the game from substitute Mohamed Gedo as he shot past keeper Kingson to the surprise of the Ghanaians. The Egyptians held on to the lead till the close of proceedings by Malian referee Koman Coulibally after three minutes of added time.