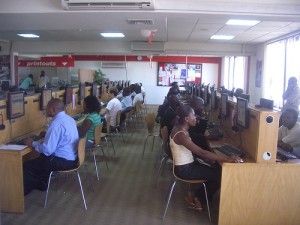 An educationist has observed that slow adaptation to modern technology and lack of initiative in its usage has contributed to the socio-political and economic development challenges facing Africa.

Reverend Dr. Charles Owiredu, Provost of the Regent University of Science and Technology in Accra, made the observation on Saturday, at the first induction ceremony of the Association of Certified Chartered Economists (ACCE) in Accra.

He condemned the blame-game attitude on the part of some public officials and said that the solution to the numerous challenges facing Africa could be found in the innovative and brilliant people that the continent was blessed with.

Rev Dr Owiredu said there was no need for Africans to look outside the continent in search of solution to the challenges beleaguering it but to search deep within for the answer. He described the 11 inductees as the new breed of problem-solving and politically-neutral economic transformers that were ready to turn the Ghanaian economy positively around.

“I challenge you to transform the Ghanaian economy to the better in order for the country to serve as a beacon to the rest on the continent,” he said.

Rev. Dr. Owiredu expressed the hope that, in ten years time, ACCE could be a force to reckon with in producing the nations leading economists that would be committed to turning the economic fortunes of the country in the positive direction.

Professor Joseph Ohene-Manu, Dean of the Faculty of Social Sciences and College of Art at the Kwame Nkrumah University of Science and Technology, condemned personal use of public funds for economic gains and stressed that the act had mitigated the economic development of the country.

He called for pragmatic steps and a non-partisan approach to solving the economic problems of the country. Mr Felix Aboagye, Legal Advisor of ACCE, conducted the conferment of fellowship and the swearing in of ACCE levels II and III ceremonies of members of the association.
Mr Christopher Ameyaw-Ekumfi, a Fellow Chartered Economist and a member of the Governing Council of ACCE, noted that professional associations in areas such as accounting and architecture were significant to national development.

He stressed the need “to regulate the conduct and activities of the professional economic institutions in Ghana in order to bring discipline into the profession.”

ACCE, a professional body affiliated to the American Academy of Financial Management, was registered under the 1963 Ghana’s Companies Code (ACT 176), to provide a professional body of economists that would be recognized by decision makers in both academia and business world both international and national.