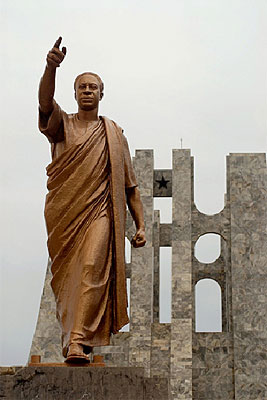 Accra, May 25, GNA – Ghana on Tuesday led the rest of Africa in what is regarded as the climax a year-long centenary birthday celebration of Osagyefo Dr Kwame Nkrumah, Founder of modern Ghana, with a solemn but colourful flag raising and wreath laying ceremony at the Kwame Nkrumah Memorial Park in Accra.

The ceremony was addressed by Vice President John Dramani Mahama and attended by eminent persons from the African Union Commission, Dr Kenneth Kaunda, Founding President of Zambia, Contemporaries of Dr Nkrumah, Speaker of Parliament, Mrs Joyce Bamford-Addo, as well as service commanders, Ministers of State, Members of Parliament, Traditional Rulers, Members of the Diplomatic and Diasporan Communities, students and a cross section of Ghanaians.

Vice President Mahama called on the African community to forge a strong commitment to synergise individual strengths into a collective whole to achieve the continent’s economic emancipation.

He said: “Standing on our individual legs, the Continent will not see through the vision of Osagyefo Dr Kwame Nkrumah and the leading lights of the liberation struggle who envisaged an Africa that will chart its own growth path and determine its destiny”.

He observed that Africa had not gotten to the end of the ’emancipation journey’ after independence and the political liberation of the continent. “We have succeeded in flying our flags but have we succeeded in flying the potential successes of the Continent’s economic might?,” the Vice President asked, and urged the continent to translate the beautiful documentations on economic emancipation to reality by giving more meaning to putting pen to paper.

The Vice President said nature’s blessing of Africa with natural and human resources were well catalogued and what was left was for the people to “bless ourselves by charting an economic path that will protect our collective interests and bring meaningful development to our people”. Vice President Mahama said Africa should take concrete steps to move away from being just producers of primary products whose prices were determined by other continents which pushed their processed materials on the continent at dictated prices which were not in the best interest of the continent and its people.

He called for a fierce war on the drug menace in addition to finding solution to wars, conflicts and famine that posed great challenges to the continent.

“We cannot allow this great continent of ours to be a subsidiary of the illicit drug trade. We need to protect our youth and their future. That is why we must wage a concerted war on the drug barons and chase them out of the Continent”.

He wished Africa well in the forthcoming World Cup tournament and added that “the joy of Ghana will know no bounds if the Black Stars lift the cup.”

Vice President Mahama expressed the hope that although the journey of the Continent was a long one, with determination and commitment Africa shall overcome.

Mr Erastus Mwencha, Deputy Chairperson of the Commission of the African Union, who has been in Ghana to participate in the Kwame Nkrumah Centenary Colloquium, eulogized Dr Nkrumah as a visionary leader, outstanding and selfless freedom fighter, and a true son of Africa.

Mr Mwencha said the OAU Charter was inspired to a large extent by the ideas of Dr Nkrumah, adding that he gave impetus to the liberation struggle even in the hostile environment of that era.

Dr Nkrumah’s vision, he said, had stood the test of time many decades after his death and that his ideas were still fresh.

Mr Mwencha asked Africans and their leaders to rededicate themselves to the integrity of Dr Nkrumah and nurture peace and security in the interest of prosperity and development as a befitting tribute to Dr Nkrumah and his legacy.

He paid tribute to the government and people of Ghana for setting a special place for the man who has been described as the greatest African of the 20th century.

Alhaji Muhammad Mumuni, Minister for Foreign Affairs and Regional Integration, hoisted the Flag of Ghana while Mr Mwencha hoisted the AU Flag. Muslim and Christian prayers were said for the progress of Ghana, unity and prosperity for Africa.

The AU last year honoured Dr Nkrumah by declaring May 25, as a continental holiday and marked September 21, the birthday of Nkrumah as a special day on the AU calendar. September 21 was also declared a national holiday in Ghana by the Mills administration under the National Democratic Congress.