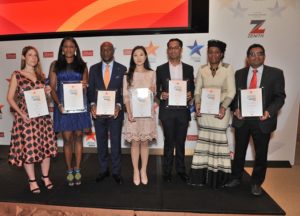 Dangote Cement wins Business of the Year award at the African Business Awards ceremony on the sidelines of the UN General Assembly in New York (version française ci-dessous).

The award for the 2015 African Business of the Year went to Dangote Cement. Helmed by Africa’s richest man, Aliko Dangote, the Nigerian cement behemoth plans to expand production in several countries in anticipation of an infrastructure and construction boom. The judging panel applauded Dangote Cement for its continued drive to develop new tailored products, gain market share and expand its activities throughout the continent.

Daphne Mashile Nkosi, Executive Chairperson, Kalagadi Manganese, South Africa received the prestigious award for Most Outstanding Woman in Business. The judges gave special recognition for Daphne’s remarkable achievements, in an industry which has often been one of dominated by men. Daphne is committed to the people of South Africa and uses every available resource to enrich the lives of the average South African. She is responsible for the creation of over 30 000 jobs in the Northern Cape, and will go down in history as the mother of the largest mining venture of its kind in the last 30 years.

Since taking over his father’s trading business in Tanzania, Business Leader of the Year Award winner, Mohammed Dewji has confidently blazed his own trail. As CEO of Tanzanian-based Mohammed Enterprise, this young businessman, still in his early forties, has acquired and turned around failing state companies in sectors as diverse as manufacturing, agriculture, and real estate. Dewji’s stewardship of MeTL has led to a place on Forbes’ Richest Africans list. The 2015 Judges paid tribute to his dynamism and his visionary leadership in growing a $30m business into a $1.3bn conglomerate.

Zimbabwean businessman, entrepreneur, and philanthropist, Strive Masiyiwa was honoured with the 2015 Lifetime Achievement Award. Strive is the founder and executive chairman of diversified international telecommunications group Econet Wireless. Strive was rewarded with the Lifetime Achievement Award not only for his commercial success but also his human qualities. Masiyiwa is considered one of Africa’s most generous humanitarians and has used his wealth to provide scholarships to over 100,000 young Africans over the past 20 years through his family foundation.

The 2015 African Business Icon Award goes to Helen Hai, the Chief Executive Officer of Made in Africa Initiative. This category recognises a person who has made a significant contribution to improving in the business landscape in Africa and or in the way business is done, helping in the transformation that is much talked about. Following a meeting with the late President Meles Zenawi in 2011, Helen, who is of Chinese origin, set up the Huajian Shoe Factory in Ethiopia in October 2011. The designer shoe factory has managed to double the export revenue in Ethiopia within 6 months, and in under two years, has recruited 4000 local workers. She has since expanded her activities and set up a garment factory in Rwanda.

Guaranty Trust Bank, beat four nominees in their category to win the Award for Good Corporate Governance while Abellon Clean Energy outdid four contenders to claim the Award for Innovation. The award for Best Corporate Social Responsibility was won by the Nigerian Stock Exchange, while the award for Insurance Company & Initiative of the Year went to BIMA.

Commenting on the Awards, Omar Ben Yedder said: “This is the seventh year that we have organised the African Business Awards. We are grateful to Zenith Bank, GTBank, Agility and Cofina for supporting African Business magazine and IC Events in bringing about this year’s awards. We have worthy winners and the work of both our winners and nominees shows what can be done on the continent with hard work and single minded determination. We would have liked to have seen more entries from the francophone world, but this may reflect the fact that English speaking countries in general have a more developed and thriving private sector.”