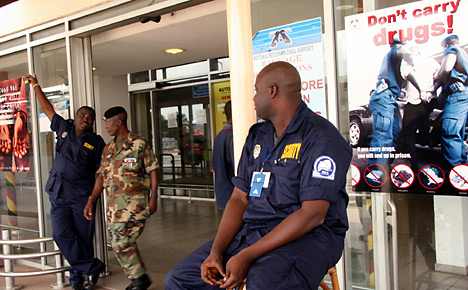 Accra, Jan. 4, GNA – The authorities have stepped up security at the Kotoka International Airport (KIA) with the recent acquisition of a full body scanner to be installed at the airport to screen passengers.Â Mr James Agyenim-Boateng, Deputy Minister of Information, told the GNA on Monday that Ghana had bought the scanner as part of measures to bolster security at the airport.

“As we speak, the scanners are being installed at the airport as part of our resolve to cooperate with global partner agencies to make air travel safe for all,” he said.Â The authorities raised security levels to the highest point, especially for US-bound flights, shortly after news that the would-be Nigerian bomber Umar Farouk Abdulmutallab was in Ghana before his journey.

The US authorities have introduced tougher screening rules for passengers arriving by air from 14 nations which they deem to be a security risk.Â Travellers from Nigeria, Pakistan, Syria, Iran, Sudan, Yemen and Cuba will be among those facing body pat-down searches and carry-on baggage checks. It follows an alleged attempt to blow up a plane on Christmas Day.

Abdulmutallab, 23, was granted a two-week stay in Ghana as any other West African citizen when he arrived before continuing to Nigeria.Â Under the ECOWAS protocol, West African citizens with valid documents can spend up to 90 days in a member country without resident permit and Mr Agyening-Boateng said Ghana was unaware of any security alert on Abdulmutallab when he arrived in Ghana.

“He got in and was processed by the immigration as any other ECOWAS citizen because we had no knowledge of any security alert on him.” Â He said Abdulmutallab arrived in Ghana on December 9 at 0320 GMT on an Ethiopian Airline flight from Dubai via Addis Ababa and left on December 24 for Lagos, Nigeria at 1706 GMT.

On arrival in Accra, Abdulmutallab’s immigration form indicated that his overseas address was Dubai, he added.
Agyenim-Boateng said while in Ghana, he checked into a hotel at Dzorwulu in Accra and throughout his stay, he did nothing to create suspicion of any sort.

The Deputy Minister debunked a statement by Nigerian officials that the suspect’s journey began from Ghana.
“It is interesting to note that although he bought the KLM ticket in Accra, he decided to start that journey from Lagos… Why did he not fly direct with the KLM from Accra to Amsterdam?” he asked.

He also debunked the assertion by the Nigerian officials that Abdulmutallab spent less that 30 minutes in Lagos.
“He left for Nigeria at 1706 GMT and left there for Amsterdam at 2255 hours,” Mr Agyenim-Boateng said.
US authorities on December 26 charged the 23-year-old Nigerian with trying to blow up a Detroit-bound airliner on Christmas Day, and officials said the suspect told them he had obtained explosive chemicals and a syringe that were sewn into his underwear from a bomb expert in Yemen associated with Al Qaeda.

Abdulmutallab appeared to have chosen his seat on Northwest Airlines Flight 253 carefully.Â The Christmas Day seat in aisle 19 placed him right over the fuel tanks of the jetliner and at the window, where an explosion would have maximum effect, US security experts told US broadcasters.

The Nigerian terrorist suspect spent 20 minutes in the bathroom as the plane entered its descent pattern into the Detroit, Michigan airport. Then he returned to his seat complaining of a stomach ache, covered his lap with a blanket and ignited the PETN explosive strapped somewhere between his legs with a fluid injection, US justice officials indicated Saturday.

All was apparently going according to plan.Â But Abdulmutallab had not reckoned with the quick-thinking response of a fellow passenger, Jasper Schuringa, a video director from Holland.Â The minute the Dutch man heard the firecracker-type popping, smelled the smoke and saw the fire coming from one row ahead of him, on the opposite side of the plane, Schuringa leapt over seats and passengers to get to the source.