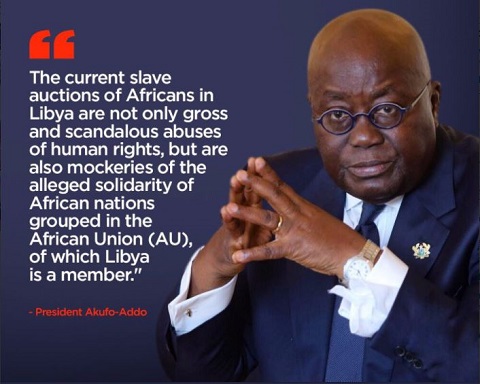 President Nana Addo Dankwa Akufo-Addo has added his voice to the worldwide condemnation towards the current slave trade in Libya.

President Nana Addo, whose father was instrumental in relieving Ghanaians of colonial rule and a human rights activist himself, said the current situation in Libya was an infringement on human rights.

He also took a swipe at the perceived harmony amongst members of the African Union as Libya being a member becomes a hub for slave auctions.

In a tweet, President Nana Addo wrote, “The current slave auctions of Africans in Libya are not only gross and scandalous abuses of human rights, but are also mockeries of the alleged solidarity of African nations grouped in the African Union (AU), of which Libya is a member.”

After reports about alleged migrant slave markets in Libya provoked global outrage, people from all over have expressed displeasure at news.

Pictures of migrants tied up, beaten and piled in cells accompanied these media reports making the news hard to bare.

Some migrants are seen in a viral video being auctioned for as low as four hundred US dollars, a site which makes it difficult for human right activists to contain.

Libya, a nation in the North of Africa has been a passage way for most Africans into Europe.

Over the years thousands of migrants who try crossing the Mediterranean end up drowning or imprisoned by some authorities in Libya.