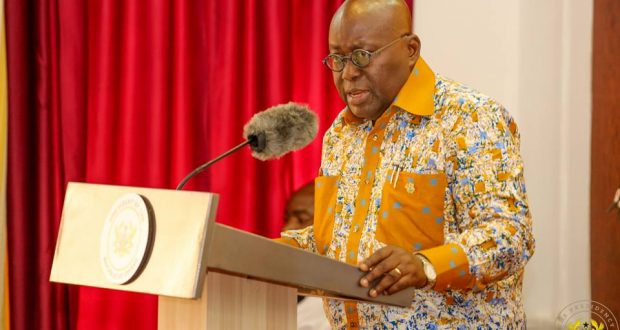 President Nana Akufo-Addo, says the vision of his Government is to establish Ghana both as an aviation hub within West Africa, and as the preferred destination of choice for travelers.

Government, President Akufo-Addo added, hopes to achieve this by working with the private sector to offer modern, attractive air transport infrastructure, and by building capacity and establishing institutional and policy framework to enhance safety and security of air services.

“It is in pursuit of this that Government has given policy approval for the establishment of a Home-Based Carrier with private sector participation, as part of efforts to fulfill our aviation-hub vision and also to enhance connectivity,” the President said.

President Akufo-Addo made this known on Wednesday, October 25, 2017, when he delivered a speech at the 1st Aerospace and Aviation Industry Show in West Africa, held at the Kotoka International Airport.

Since assuming office in January 2017, and following his Government’s decision to remove the 17.5% Value Added Tax (VAT) on domestic air fares to make domestic travel affordable, President Akufo-Addo noted that domestic airfares have some seen reduction, and the passenger throughput has increased significantly from 302,270 as at September, 2016, to 373,429 as at September, 2017, representing a 23.5% increase.

Additionally, the President noted that the number of international airlines operating in the country has increased from 35 to 37 this year, noting that other domestic airlines will, hopefully, follow suit soon.

“I have been reliably informed that the captain of our Senior National Team, the Black Stars, Asamoah Gyan, has obtained an Air Carrier License (ACL), and is working feverishly to establish an airline, called Baby Jet Airlines.

I want to appeal to other Ghanaians, both home and abroad, to invest in the rapidly growing aviation sector,” he added.

With growth rate in Ghana’s aviation industry averaging 7.9% per annum, the President revealed that his Government’s overall direction for national development, as contained in his Co-ordinated Programme of Economic and Social Development Policies (CP) (2017-2024), is to create the conditions for the private sector to thrive in the aviation industry in order to propel growth and create employment, especially for the youth.

That is why, he added, “my Government has re-created the Aviation Ministry to develop the Ghanaian aviation industry, and make it highly competitive within the West African region. There are on-going and up-coming projects in Ghana’s aviation sector, which will lead to an enhanced air travel experience.”

These ongoing projects include: construction of Terminal 3 at Kotoka International Airport (K.I.A), designed to accommodate five (5) million passengers in the next 5 years to be completed in April, 2018; construction of Modern Air Navigation Services Centre at K.I.A, to ensure safety and security of aircrafts and passengers in our air space; and construction of Phase II of both Kumasi and Tamale Airports.

“The need for these investments in infrastructure and air navigation systems is to respond to anticipated traffic growth, and also to keep up with the dynamism in technology that the aviation industry demands,” he added.

Lamenting the challenging nature of air travel connectivity in Africa, President Akufo-Addo noted that the 1999 Yamoussoukro, when fully implemented by all States, will improve air transport and guarantee lower fares and increase traffic on the continent.

The President continued, “With Ghana determined to fulfill its role as the gate way to West Africa, Government is poised to build the most people-friendly and business-friendly economy in Africa, to boost the confidence of the private sector to invest in the Ghanaian economy.

I, therefore, respectfully, call on all investors to partner domestic counterparts to ensure the realisation of this vision. This is the way to creating jobs and prosperity for all Ghanaians.”