The energetic evergreen live band music legend, Amakye Dede thrilled scoresÂ  of revelers at his December 27 concert, â€˜Abrantie Amakye Dede Live In Concertâ€™ at the Accra International Conference Centre. Among the many highlights of the hugely successful and well patronized concert was the musicianâ€™s most bold attempt with the English language yet! In an uncharacteristic manner, Amakye Dede spent minutes addressing the crowd in English language instead of his more familiar tongue, Twi.

In spite of some hits and misses, one thing that was clear in his speech was his appreciation of the support of Ghanaian throughout the decades that he has been performing. And of course his now infamous catch phrase, â€˜seriousâ€™ couldnâ€™t go unnoticed.

Abrantie Amakye Dede in his interaction with the crowd which included former President John Agyekum Kufuor, remarked that he has now grown from being the â€˜iron boyâ€™ to an â€˜iron manâ€™ just before he performed his hit song, â€˜Iron Boyâ€™. 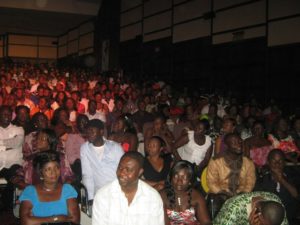 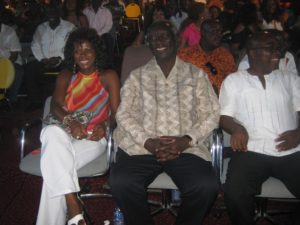