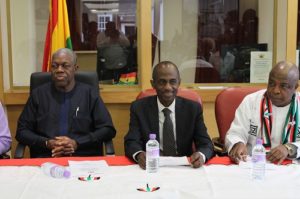 During a stop over visit on his way from Turkey, HE Paa Kwesi Amissah-Arthur, Vice President of the Republic of Ghana met with a cross section of Ghanaians living in the United Kingdom and interacted with them on a number of pertinent issues. Prominent among them were the Ghanaian economy, government’s social interventions and the upcoming November elections.

At a colourful event held on Monday 30th of May 2016 at Highgate Hill in North London, the outreach program brought together Ghanaians living in London, Sheffield, Luton, Milton Kynes and Hull. Mr. Kofi Kwakye, Chairman of NDC UK/Ireland chapter and his team of executives were at the event to support the Vice President.

Setting the tone, Mr Kofi Kwakye thanked the Vice President, and his entourage for the opportunity to interact with them. After introducing his co executives, Mr Kwakye informed the outreach team that the NDC UK and Ireland Chapter “has grown from strength to strength with the inauguration of five new branches to support the work of the chapter.”

He entreated all present to work hard towards renewing the mandate of the NDC government, stressing that the Green Book contained most of the achievements of the NDC and should, therefore, serve as a guide during their outreach programs.

When it was his turn to address the gathering, Hon Kofi Attoh spoke about the developments going on in Ghana and pointed out that they placed the NDC in a better position to win the next election. He praised NDC UK and Ireland Chapter members who came to Ghana to help with the outreach program as well as those who came to assist in the monitoring of the limited registration exercise in Ghana. Hon Attoh called on NDC members in the diaspora to come to Ghana and help the party during the general elections.

General Secretary of the NDC, Hon Asiedu Nketiah talked about peace during this electioneering period and said as Ghanaians, we needed to do everything to maintain the peace and eschew all acts of violence.

He said, “since Ghanaians gave the NDC party the mandate in 2012, they (Ghanaians) will also ask us to account for whatever we do hence the NDC as a political party must stay away from violence.”

He praised the good work being done by the government which culminated in the publication of the green book. He chided the main opposition in Ghana for being disingenuous by querying the authenticity of the projects enumerated in the green book as photoshopped and artist impressions. The NDC General Secretary observed that no country at war could develop and advised the opposition to desist from war mongering.

The Vice President HE Paa Kwesi Amissah-Arthur was the last to speak. He thanked everybody for taking time out of their busy schedule to be present to hear him. He pointed out that the NDC is well known for their outreach programs and cited the 1995 version which was held to elicit the views of Ghanaians after the launch of the VAT. He said in line with this tradition, the NDC is reaching out, even more, to enable it better understand the people’s needs and attend to them.

Vice President Amissah-Arthur said due to the social interventions of the NDC government especially in the area of education, school enrolments had increased to 97 percent with female literacy rate close to 80 percent. He said government remained committed to the FCUBE programme and would continue to ensure that all children of school going age were enrolled in school by expanding on infrastructure in the educational sector.

Touching on the economy, Vice President Amissah-Arthur said the government had chalked some success in macro economic management and was now focusing on micro economic policies. He stressed that since a change of government always meant a change in priority, there was the need for political continuity and stability to consolidate development.

He reiterated that “stability brings about investment and it ensures both a sustained focus and a constancy in plan”. Vice President Amissah-Arthur emphasised that this was the first time in the history of Ghana’s democracy that a sitting government had been committed to an IMF programme before general elections and lauded the current NDC administration for the brave move.

On elections and electioneering, Vice President Amissah-Arthur said since 1995; the NDC party had embarked on a second outreach programme to listen to party members, help resolve disputes within the ranks of the party and allay their anxieties. He intimated that undecided voters were an important constituency to winning the elections, and so every effort should be made to educate and court them to ensure victory.

Within the context of the insidious effects of opposition propaganda even on some of the NDC members, the Vice President pointed out that Ghana was doing better than most African and other developing countries and it was important to maintain our focus by “transforming lives and sustaining the momentum.”