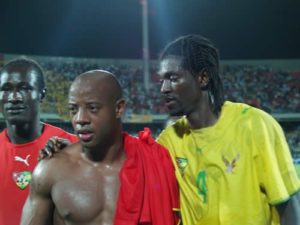 Togo seemed set to withdraw from the African Cup of Nations last night, despite last-ditch negotiations to keep them in the tournament.In the Angolan enclave of Cabinda â€“ the scene of Friday’s ambush which killed three people and left seven injured â€“ a plane sent by the Togolese government sat on the tarmac ready to take the team home.Gilbert Houngbo, the Prime Minister, had earlier held a news conference in the Togolese capital, Lome, at which he ordered the team home, despite their wishes to continue in the competition as a way of honouring their slain colleagues.”If a team or some people present themselves under the Togolese flag, it will be a false representation,” he said.The team’s captain and Manchester City player, Emmanuel Adebayor, confirmed that the players had listened to their Prime Minister.“We had a meeting between players yesterday and we told ourselves we were football players and decided to do something nice for our country by playing to pay tribute to those who died,” he told the French radio station RMC yesterday. “Unfortunately, the head of state and the country’s authorities have made a different decision, so we will pack and go home.”But as the tournament’s opening ceremony began in the capital, Luanda, it emerged that Angolan officials were meeting government representatives from three other nations in an emergency meeting so as to avoid the 2010 tournament being a team down. There was the possibility that Togo might stay after all, and Namibia and Botswana had apparently been invited to see if they could fulfil the unlikely task of sending a team to substitute should the West Africans head home.Togo’s media officer, Stanislas Ocloo, assistant coach, Amalete Abalo, and the Angolan driving the squad bus were killed when gunmen from the Front for the Liberation of the Enclave of Cabinda (FLEC) opened fire. Togo’s reserve goalkeeper, Kodjovi Obilale, was in a stable condition in a South African hospital yesterday after having surgery.Togo had been due to play Ghana today, but Group B is likely to begin as a three-team group with a game between Ivory Coast and Burkina Faso. While FLEC has warned of a continuing campaign of violence, Issa Hayatou, president of CAF (the Confederation of African Football), insisted yesterday that he had had assurances from the Angolan Prime Minister that security would be tightened at all venues.