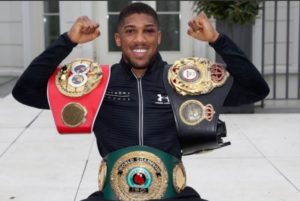 And the undefeated fighter will be honoured for his heroics in Nigeria where his parents were born.

Joshua’s family own around half of the land and property on one side of the street and the cinema was built by his great grandfather Omo-Oba Daniel Adebambo Joshua in the 50s.

Hundreds of people flocked in Sagumu to watch Joshua claim the biggest victory of his career.