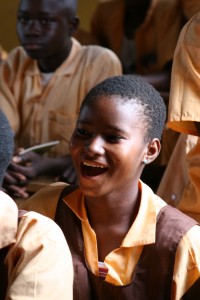 Mr. Kwame Alorvi, President of National Association of Graduate Teachers, has argued that the solution to improving the quality of education in Ghana does not lie in extending course durations.

He said there is no reason to subject Ghanaian school children to four years Senior High School when Liberia and Sierra Leone, among other members of the West African Examinations Council, are taking the same programme for three years.

â€œAre we sending a signal to them that they are less intelligent than their colleagues in those countries? With even those war-torn situations, all the sub-regional countries- Nigeria, Sierra Leone, Gambia, Liberia can do it for three years and our children cannot do it for three years, I donâ€™t believe so.â€

He said NAGRAT also served on the Anamuah-Mensah Committee charged by the former government headed by President Kufuor to research into the suitability or otherwise of the four years SHS which recommended that the then-three-year duration was ok. He said when the current education system was started, Ghanaian universities conducted entrance examinations for SSS candidates but later curtailed that because the institutions realized the quality was improving.

â€œWe have produced engineers, lawyers, doctors during the three years, serving the system now,â€ he said.

Mr. Alorvi also doubted the ability of the government to foot bills for the four-year programme.
He said between the well endowed and deprived schools, student failures are recorded mainly in the deprived areas whereas very limited, if any, come from the endowed schools.

â€œThey are failing from Mepe Secondary School where the headmaster and assistants share the same bungalow, where there is no hostel facility for the children, where thereâ€™s no classroom facilities for them, no library, no electricity in that area, a weak PTA, a weak old students association. Compare Wesley Girls and Mfantsipim- strong PTAs which can contribute and give the headmistress or the heads good offices, well furnished, air-conditioned, can provide infrastructure in the school. Even now that the programme is for four years, go round the schools and see; the structures are being put in the same schools because the big men have their children over there â€“ Wesley Girls, Holy Child, Mfantsipim School, Opoku Ware. My village school has not got even an infrastructure added.â€

According to Mr. Alorvi, addressing the problems require that teachers are properly motivated and resourced, while infrastructure is improved for the less endowed schools.