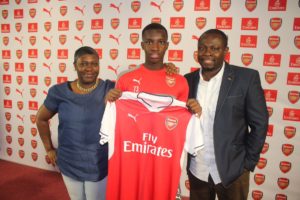 Ghana coach Kwesi Appiah met with the 19-year-old in Iceland somewhere in 2018 and held talks with him concerning his international future.

But, the striker reportedly told the Ghana head coach he is not interested in playing for Ghana for now as he seeks to pursue an international career with England.

England manager Gary Southgate has watched Nketiah trained under his Three Lions squad and the Gunners man feel he could have a real opportunity to play for England.

Arsenal manager Unai Emery has given playing time to the budding striker in his first team squad in domestic competition and in the UEFA Europa League.

Ghana Sports sources have confirmed that the striker told coach bluntly that he is not interested in playing for Ghana during the said meeting in Iceland.

A further probe by Ghana Sports Online has revealed that the family of the striker are livid with the Ghana FA after the rejected the player for the Ghana U17 team about three years ago.

According to our sources the father of the striker travelled to Ghana to engage the technical team and some management members of the team demanded for financial gain before inviting the player to play for Ghana.

The father of the player refused to pay the money the said management committee members were demanding and flew back to his base in the United Kingdom.

Ghana Sports understands that the events have shaped up the thought patterns of the striker’s family who are now opposed to the idea of switching his nationality to play for Ghana.

Nketiah has scored 18 goals for England at U18, U19, U20 and U21 levels and is highly rated by technical members of the England national team