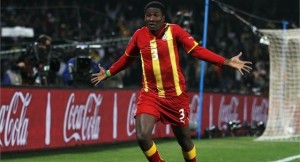 Sunderland have broken their transfer record with the signing of Ghana international striker Asamoah Gyan from Rennes.

The Black Cats were locked in talks for much of transfer deadline day to secure the signing of Gyan, who was one of the stars of this summer’s World Cup finals.

Now the North East club have finalised a deal worth in excess of Â£13million for Gyan, beating their previous record of Â£10 million which they paid for Darren Bent from Tottenham in 2009.

The 24-year-old underwent a medical on Tuesday morning before penning a four-year contract with the Black Cats.

In a move to off-set some of the huge fee, Sunderland have agreed to let Martyn Waghorn join Leicester in a deal worth Â£3 million.