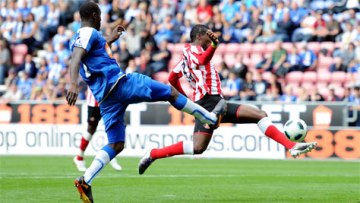 Ghana striker Asamoah Gyan lived up to expectation by netting on his debut but 10-man Sunderland had to settle for a point Wigan.

The Black Cats were left facing an uphill struggle when skipper Lee Cattermole was dismissed after picking up his second booking in the 21st minute.

But Steve Bruceâ€™s men refused to roll over and die while Gyan was thrown into action midway through the second half.

The Â£13million debutant wasted little time in putting himself about and broke the deadlock after 66 minutes, firing home a left-foot effort from Jordan Hendersonâ€™s cross.

Cue manic scenes from the massed ranks behind the other goal as the dancing Ghanaian celebrated in style with the moves which have now become his trademark.

He could have even had another goal soon afterwards following a neat one-two with the excellent Malbranque, but the strikerâ€™s shot was unfortunately high and wide.

And the Black Cats appeared to be heading for three points until Tom Cleverleyâ€™s effort hit team-mate Antolin Alcaraz and spun into the net in the 87th minute.

But Gyan will have this game forever etched in his memory as he entered with his Ghana flag on his wrist to firmly represent the West African country.

Coach Steve Bruce resisted the temptation to hand the record signing Gyan a first Sunderland start in the Premier League at Wigan today.

Gyan, a Â£13m deadline day signing from Rennes, was put on the bench, as Bruce played five players in midfield.

The 24-year-old trained with his new side only two days ago following his Â£13million deadline-day move to the Black Cats and had been in Ghana for his countryâ€™s African Cup of Nations qualifier against Swaziland.