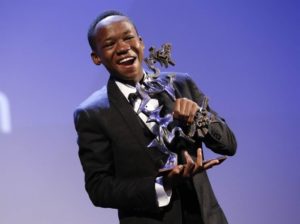 The life of a young street vendor from Ghana has changed for good or let’s say, is about to take a shocking good turn.

Without having ever stepped a foot in any acting classroom or haven’t even dreamt of ever becoming an actor, Attah Abraham who was picked from the streets of Ghana during the shooting of Netflix’s soon to be released movie “Beasts of No Nation“, has won the prestigious Marcello Mastroianni’s Best Young Actor award at the 2015 Venice Film Festival, the world’s oldest film festival.

It surely was a risky business to fly into Ghana and pick a street vendor to become your lead actor—you can say director Cary Fukunaga is crazy for doing this but his edge for risk has started paying off.

In April this year, producer James Schamus and director Cary Fukunaga at the Tribeca Film Festival spoke about how their latest film-Beasts of No Nation, starring Idris Elba’s teenage lead actor was randomly picked from the streets of Ghana.

Cary Fukunaga said; “the lead in ‘Beasts of No Nation’ was essentially a street vendor before we shot the film. [He had] zero film experience, little education…but he became a somewhat professional actor, which was astounding to watch.”

Fukunaga added that, “his unlikely star’s name is Abraham Attah, and he is a 14-year-old who plays an 11-year-old child soldier in the film. Abraham’s character joins a militant group from an unnamed West African country that is led by a brutal warlord, played by Idris Elba (“Luther”)” reported the BusinessInsider.

Some will call it talent and others may call it the work of God—whatever it is, Attah Abraham’s future has new shinning stars—the 14 year old Ghanaian street vendor with no hope of a better tomorrow has now become an inspiration to even already ‘established’ Ghanaian actors. 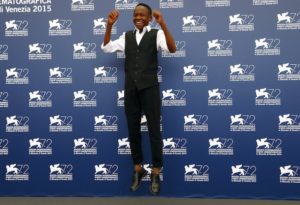 Though it was a street pick, Abraham initially had to fight for the role. Fukunaga mentioned that it was an interesting casting process;

“We gathered a bunch of kids who had potential, about 30 of them, and we did this theater workshop and tried scenes that were in the script, and we would improvise. See if these kids could play a variety of emotions and actions that take place in the story. And the kids are fast learners, they quickly understood that the better they did the longer they stayed [in the running for the role].”

Even when he scored the role, Abraham took charge of affairs and made shocking progress during the shooting. Touching on the amazing progression of Abraham during the difficult scenes of filming, director-Fukunaga told the film festival audience at the time that;

“We had a difficult one long take that he had to perform; probably the most intense thing I ever asked him to do in the film. He had six or seven kids around him performing [in the scene], and I watched him become a leader among these kids and make sure they stayed in focus and not f— up the shot so they didn’t have to do it over again. I gave almost no direction to those kids. Abraham was driving that scene.”

Ghana has somewhat a stagnant movie industry with many of its ‘big actors’ and actresses like John Dumelo, Majid Michel, Van Vicker, Yvonne Nelson, Nadia Buari and Jackie Appiah forever dreaming of playing even just a supporting role in a big budget movie that stars the man rumoured to be the next James Bond-Idris Elba.

But Attah Abraham, a young street hawker took the lead and performed greatly in “Beasts of No Nation”—thereby securing a prestigious award at the Venice Film Festivals.

Abraham may never act again but this has changed his life for good—as he was put into a boarding school by the film makers, an education he would never have had. 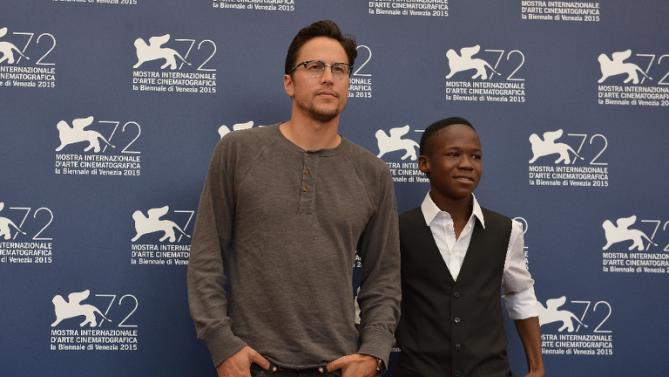 “There’s a reality that these kids will probably not have a career as an actor, so this experience is a one-time experience. For Abraham, he’s only 14 so we had to get him up to speed in school, so right now we put him into boarding school back in Ghana so he can get up to normal 14 year old academics. By nature of us crossing into these people’s lives you have some responsibility there to make their lives better, but at the same time you’re not adopting a child, by any means,” Cary Fukunaga said.

At the press conference of the film at Venice Film Festival, Abraham told reporters that the only time he felt fear during the filming of the brutal violent scenes was when he first played opposite Idris Elba. “I felt like an ant,” he joked.

Idris Elba who is currently shooting a film in Canada could not attend the festival, so Abraham Attah took all the international shine as the star at the movie’s press conference—this is a boy who perhaps had not heard of Venice Film Festival before just about a year ago.

The official trailer of ‘Beasts of No Nation’ was released last week and as Netflix announced earlier this year, the movie “will open in select cinemas in the US and on its streaming platform for the rest of the world” in October.

Netflix stated a few months ago that “Beasts of No Nation” is a powerful film that unfolds beautifully in the hands of director Cary Fukunaga, with Idris Elba delivering a career-defining performance.

We are so proud to bring a film of this calibre exclusively to Netflix members around the world at the same time as it appears in select theaters.”