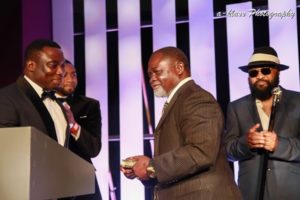 Former WBC featherweight champion Azumah Nelson was given the GUBA Sporting Legend Award at an awards ceremony held in London.

The award was in recognition of Nelson’s outstanding boxing career that run from 1978 to 1998.

Nelson won the featherweight title in 1984 and held it for three years. He moved up to the Super Featherweight division in 1988 and despite winning his first four fights in the weight class, he lost the crown to Pernell Whittaker in 1990.

Between then and his retirement, Nelson was involved in some of the sport’s most interesting bouts against Jesse James Leija and Jeff Fenech.

Nelson was voted into the International Boxing Hall of Fame in 2014.

Azumah Nelson was one of the many awardees honoured at the 2015 GUBA Awards held to recognize achievers in different spheres of Ghanaian life.