DAKAR, SENEGAL, March 29, 2021 – The Basketball Africa League (BAL) today announced that the league’s historic inaugural season will tip off Sunday, May 16 at the Kigali Arena in Kigali, Rwanda, with 12 teams from across Africa competing in the new professional league. The BAL, a partnership between the International Basketball Federation (FIBA) and the National Basketball Association (NBA), builds on the foundation of club competitions FIBA Regional Office Africa has organized on the continent and marks the NBA’s first collaboration to operate a league outside of North America. The first BAL Finals will be held Sunday, May 30.

The BAL has created robust health and safety protocols for the 12 teams and personnel traveling to Rwanda, based on guidance from the World Health Organization and the Africa Centres for Disease Control and Prevention, with advice from public health officials and medical experts.

“We are thrilled that the inaugural Basketball Africa League season will take place at the world-class Kigali Arena,” said BAL President Amadou Gallo Fall. “Through the BAL, we will provide a platform for elite players from across the continent to showcase their talent and inspire fans of all ages, use basketball as an economic growth engine across Africa, and shine a light on Africa’s vibrant sporting culture.”

“We are extremely happy to finally launch the highly anticipated first season of the BAL,” said FIBA Africa and BAL Board President Anibal Manave. “FIBA and the NBA have been working closely together to develop protocols to address the health and safety of all players, coaches, and officials. The experience of hosting the FIBA AfroBasket 2021 Qualifiers in Rwanda late last year will contribute to a safe and successful inaugural BAL season.”

The league today also announced an adjusted competition format for the inaugural season, which will feature a total of 26 games at the Kigali Arena. The competition will tip off with an 18-game group phase with the 12 teams divided into three groups of four. During the group phase, each team will face the three other teams in its group once. The top eight teams from the group phase will qualify for the playoffs, which will be single elimination in all three rounds.

Below are the 12 club teams from 12 African countries that will compete in the inaugural BAL season: 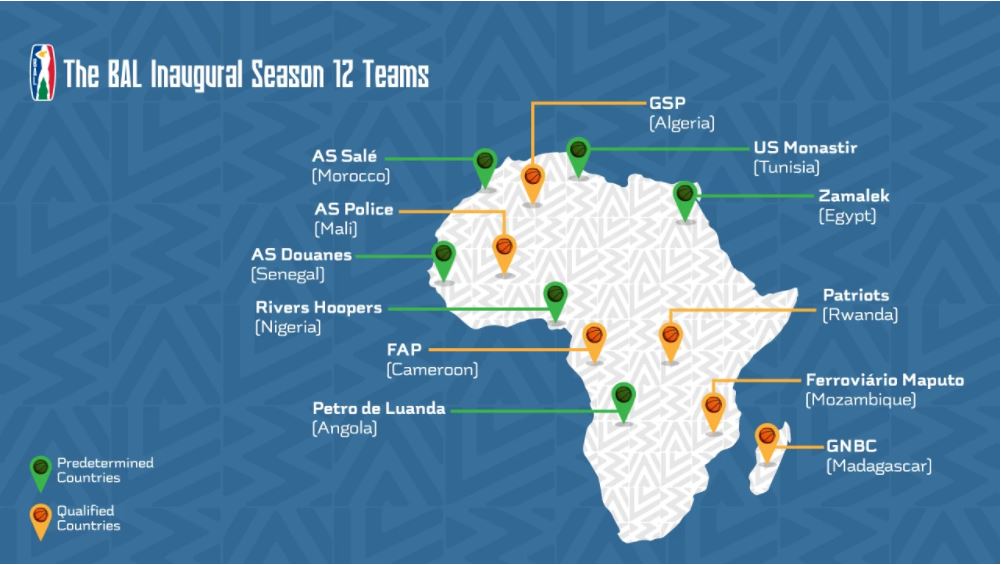 Champions from the national leagues in Angola, Egypt, Morocco, Nigeria, Senegal, and Tunisia earned their participation in the inaugural season. The remaining six teams, which come from Algeria, Cameroon, Madagascar, Mali, Mozambique, and Rwanda, secured their participation through BAL qualifying tournaments conducted by FIBA Regional Office Africa across the continent in late 2019.

The BAL groups and additional details about the league will be announced at a later date.

The BAL, a partnership between the International Basketball Federation (FIBA) and the NBA, is a new professional league featuring 12 club teams from across Africa. Headquartered in Dakar, Senegal, the BAL builds on the foundation of club competitions FIBA has organized in Africa and marks the NBA’s first collaboration to operate a league outside North America. Fans can follow the BAL (@theBAL) on Twitter, Instagram, and Facebook and register their interest in receiving more information at www.theBAL.com.