The king of African Dancehall, Ghanaâ€™s own Samini is presently in the â€˜Rasta landâ€™ far away Jamaica to promote his music and himself as an artiste.

He left the shores of Ghana to the outside world to have first hand information about how other countries run their industry and subsequently impart whatever he learns there to the music industry back at home. 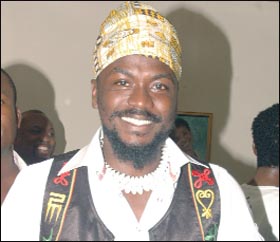 In a phone interview with Beatwaves from Kingston, Jamaica, Samini sounded very excited. Asked what his trip to Jamaica was all about, Samini said: â€œWell, Iâ€™m here to introduce myself to my fans in Jamaica, to meet various Jamaican artistes and basically blend myself with them to be able to release an album in Ghana and release it in Jamaica and other countries as wellâ€.

Though this is not the first time he has traveled outside, he said this is the first promotional trip he is making to increase his fan base and be part of a bigger market out there. While in Jamaica, Samini said he will shoot the video of one of his new songs titled â€œKind of girlâ€ featuring Faze from Nigeria.

Samini indicated that another reason he went to the Reggae land was to reproduce and re-master his current â€œDagaatiâ€ album in a Jamaican studio to an international standard sound that can break through anywhere in the world.

He added that even though his entire future album will still be recorded in Ghana, he will always do the final mixing and mastering in Jamaica. So far he has met with big Reggae names such as Anthony B, Mickey Bennet, Legendary Rory, Root Underground, Muta Baruka, Queen I-Frica, Morgan Heritage and a host of others.

He also met with top producers (sound engineers) in Jamaica – a lady called Tandra and one Computer Paul – who produced Akonâ€™s â€œMama Africaâ€. He is also recording a song with Morgan Heritage in one of the biggest studios in Jamaica called Big Yard Studios which belongs to Ragga superstar Shaggy. He indicated that Ghana and Jamaica have a lot in common; the people, the colours of our flags, the food, patriotism and peace.

According to Samini the only difference is that in Jamaica everybody speaks Patua – the official language.

To his fans back home, Samini says a big thank you to everybody. â€œI thank all my fans in Ghana for their support. If it was not for them I wouldnâ€™t be here today.
All I need is their prayers. I will hold the flag of Ghana high everywhere I go. They should buy and enjoy my new album. I wish every Ghanaian a happy new year.