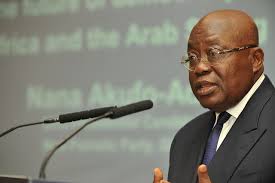 According to a press release signed by Nana Addo’s press secretary, Eugene Arhin, the interview forms part of the 750th anniversary of the first Westminster parliament and 800 years since the sealing of Magna Carta, both of which events played very significant roles in the development of parliamentary democracy under the rule of law in Britain and elsewhere, including Ghana.

The release further adds that the British Broadcasting Corporation (BBC), in collaboration with the British House of Commons and the House of Lords, in London will commemorate these anniversaries.

“Democracy Day will be a day of live events, discussions and debates inside Westminster and at the BBC Radio Theatre on various aspects of democracy before a live audience and to be broadcast across the world.”

It also added that Nana Akufo-Addo, has been invited by the BBC because he is “someone who has spoken very eloquently on democracy and governance” to speak in a panel discussion on the future of democracy in Africa.

“Nana Akufo-Addo will also be interviewed on BBC’s ‘Focus on Africa’ programme after the panel discussion after 1200hrs GMT.”

He will also on January 21, deliver a speech at the Chatham House.