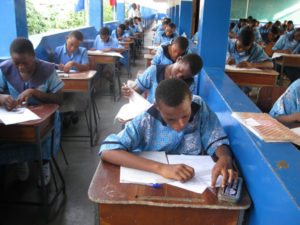 There have been joyous outpouring from Junior High School candidates who completed the Basic Education Certificate Examination successfully on Friday.

In some insstances, candidates traded in powder-throwing, smearing their colleagues in congratulatory gestures as they stormed out of the exams halls into a new world.

Some shouted “it is all over” and for others it was “the toils are over”.

French papersÂ I andÂ II completed the week-long exercise that will be the basis for the selection of students for Senior High School and Technical Schools.

The exams started on Monday, April 19 with over 300,000 candidates nationwide.

Myjoyonline visited some centres in Accra including the Oâ€™Reilly High School Centre which had a total of 276 candidates from five different schools.

Centre supervisor M.S.K Dankwa toldÂ Myjoyonline.com that all candidates had been present throughout the week to take the exams.

He noted that the only problem the centre encountered had to do with two candidates who could not write the pre-technical skills paper because they were not registered for any of the options under the subject.

The Accra High School Centre B on the other hand had 230 candidates drawn from nine schools.

According to Centre supervisor J.T. Tugah, the centre did not encounter any problem throughout the 5-day exams except for the John Harvard Junior High School which did not write the French paper because its candidates were not registered.

A total of 236 candidates took the exams at the Accra High School Centre A.

These candidates also came from nine schools all in Accra.

Three candidates were absent from Monday to Thursday but four did not turn up on Friday to write the French papers.

All the supervisors who spoke toMyjoyonline.comcomplained about the time with which exams papers were made available to them.

The claimed officers in charge of making the papers available to them always arrived late, thereby slowing the whole process.

They appealed to authorities to provide them with the papers ahead of time in subsequent examinations.

When the bell rang for the end of the examinations, candidates at the Accra High School centres A & B shouted for joy as they rushed out of the exams halls.

Myjoyonline.comâ€™s visit to the Nima Cluster of Schools centre during the final paper, French saw a relatively calm atmosphere with students busily concentrating on the paper.

Supervisor for the centre, Agnes Adenyo toldÂ Myjoyonline.com that the centre did not recorded any exam malpractice and the pupils have been very disciplined. She said the centre which had 10 invigilators has been applauded by the various exam inspectors who came on regular check-ups.