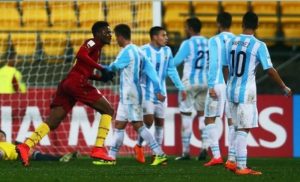 The Wellington Regional Stadium witnessed a beautiful game of football as the two sides gave the handful of supporters a lot to cheer about.

Ghana went ahead in the 44th minute through a Benjamin Tetteh goal, which was consolidated with a Clifford Aboagye 59th minute effort. Aboagye, who had missed the opening game, made a bold statement upon his return with a counter attack perfect finish that sealed off the Argentine threat halfway.

Ghana would add one more goal to her two, with a Yaw Yeboah beautifully converted a penalty in the 69th minute.

Argentian fought back with two goals in the 80th and 90th minutes to reduce their deficit to one.

The win means four points for Ghana, who drew 1-1 with Austria in the opening game.

In the other Group B game, Austria beat Panama by 2-1 to also rake in some four points