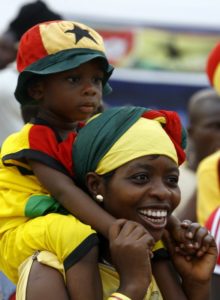 Accra, Feb 2, GNA – Ghana’s National Soccer Team, the Black Stars, arrived home this evening from Angola, after taking second place in the just ended African Cup of Nations.They lost their final match to the Pharaohs of Egypt.A large crowd gathered at the Kotoka International Airport (KIA), to welcome the Black Stars, amidst drumming and dancing. Mr. Rashid Pelpuo, out-going Minister of Youth and Sports, who accompanied the team to Angola, said at a press conference at the KIA that although some people had little faith in the team because of the absence of some key players, the stars had proved them wrong by their excellent performance.He expressed gratitude for the rousing welcome that was given to the team, adding: “It shows that it is worth dying a little for Ghana.” Mr. Pelpuo, accompanied by Nii Nortey Duah, Deputy Minister of Youth and Sports, said football served as a key unifying factor in the country, adding that the government would continue to support the game as best as possible.Ms. Akua Sena Dansoa, in-coming Minister of Youth and Sports, said the ability of the stars to “die a little for Ghana”, and their determination had made them come back as heroes.“We are praying for you and hope your example would be emulated,” she added.Mr. Kwesi Awhoi, Minister of Agriculture, praised the stars and said their excellent performance against the pharaohs, qualified them as heroes, despite the fact that they lost the match.He urged them to continue with their hard work in order to lift the flag of Ghana high, adding, “If there is any one thing that unites this country, then it is football.”Mr. Richard Kingston, Captain of the Black Stars and Goal Keeper, on behalf of the team expressed, gratitude for the kingly welcome given to the Black Stars.“We would have loved to come with the cup but our wish is not the wish of God,” he said.Mr. Kingston thanked Ghanaians and all fans and supporters of the Black Stars for welcoming the team back home honourably. The Stars are expected to attend a lunch with President John Evans Atta Mills at the Osu Castle at 1400 hours on Tuesday. 2 Feb. 10