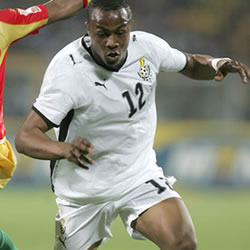 Andre Ayew led the senior national team of Ghana for their first game in the 2015 African Cup of Nations as Black Stars captain Asamoah Gyan sat out the game due to sickness.

The Black Stars lost the game to a late goal from Senegal’s Moussa Sow after Mame Biram Diouf had equalized an Andre Ayew penalty goal for Ghana.

The captain on the day could not hide his disappointment after the game, ruing some missed chances and criticizing the Black Stars.

“We were leading and in the first half we had two chances more to kill it. If we’d even one out of the two chances, we would have been 2-0 up and will be a totally different game. But we couldn’t, and that is part of the game – we’re going to score goals, we’re going to miss goals but what is important is that the second half performance wasn’t good enough. We need to work on it and prepare [for the next game].”

Ghana will play Algeria and South Africa for the last two games of the group that has been tagged the ‘Group of Death’ for the 2015 African Cup of Nations.