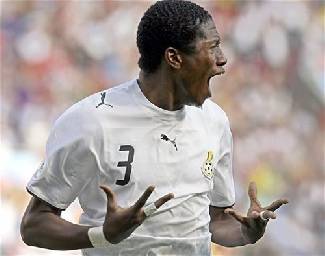 Luanda, Angola – The Black Stars of Ghana on Sunday stunned host nation the Palancras Negras of Angola with a lone goal victory in a nerve wracking quarter finals encounter at the 11th November Sports Stadium in Luanda.Â In a highly unfriendly atmosphere with boos and hoots greeting the presence of the Ghanaian players during pitch inspection, warmÂ up and the final trotting unto the pitch for the crucial game, it was a one sided affair as the Angolans mounted series of attacks in theÂ Ghanaian in search of the opener in the early minutes of the game. With a huge attendance that overcrowded the handful of Ghanaian supporters at the 50,000 capacity 11th November SportsStadium in Southern Luanda, which was painted in the Angolan national colours and combined with the ever popular vuvuzelas, theÂ host nation was in full control and had all the set pieces coming their way but lacking the final bite to cause any havoc. Within a spate of four minutes, Andre Ayew’s name had gone on the booking sheet of the Algerian referee, with the host earning aÂ corner and free-kick but all were subsequently wasted. So intense was the pressure on the Stars that Lee Arday nearly scored two own goals but for the intervention of keeper RichardÂ Kingson under the first quarter of the game. Coach Milovan Rajevic adopted the traditional 4-4-2 system with Opoku Agyeman taking over Mathew Amoah’s role, indicating aÂ slight change in the set up that defeated Burkina Faso in the last group game at the same venue for his men to cautiously soak theÂ pressure from the host nation with occasional breaks. It was during one of such occasional raids that Asamoah Gyan stunned the entire stadium with a perfect goal in the 15th minuteÂ when Kwadwo Asamoah located him deep in the opponent’s area after winning a midfield battle and the lone striker wasted no time inÂ directing the ball into the corner of the goal post. As if the goal will unsettle the host nation, it rather gingered them to search for the much needed equalizer whilst the Stars wereÂ kept on the edge in an electrified atmosphere even though they occasional made some breaks.The Stars’ attempt to create a barrier at the midfield did not work to perfection as the Angolans continued with their dominance inÂ the Ghanaian area with over five set pieces in the last 30 minutes of the game and nearly had the equalizer in the 29th minute throughÂ a header from Alberto Mateus Manucho but keeper Kingson was alert to save the situation. In a desperate attempt for the equaliser, Jose Mabina Albert was yellow carded in the process but the team remained resolute andÂ the 43rd minute saw a loose ball falling on Manucho but he surprisingly shot over the bar. The attacking pair of Amado Flavio and Manucho however remained a constant threat to Ghana’s victory as the pressure continuedÂ even though the Angolans failed to get the equalizer at the close of the first half.

The second half was not different from the first half as Ghana struggled to find its rhythm in the game with the home side stillÂ dominating the game but lacked the bite up front to find the net. Ghana was compelled to withdraw Gyan for Mathew Amoah whilst the Angolans brought on Job Estevo Ricardo for Cruz Stelvio butÂ the presence of the two on each side did not create any immediate difference but it was Ricardo who later proved his worth as heÂ brought more bite in the hosts attack. Despite the Angolan pressure they were unable to create any clear cut chances as the striking pair of Flavio and Manucho found theÂ Ghanaian defence difficult to penetrate with Ghanaian however getting their brightest chance in the 65th minute when DramaniÂ picked up a volley from Agyerman Badu but his shot went straight into the hands of the goalie. Four minutes later Angola created a melee in the Ghana goal area but there was no connection to cancel the lead with theÂ subsequent set pieces wasted whilst a free header for Manucho again missed the target.

Stars Eric Addo came on for Dramani to add strength to the midfield whilst Asamoah took a move further into attack but theÂ pressure never ceased from the Angolans but the desire to walk the ball into the net failed them when it mattered most. But for some brave defence work from Isaac Vorsah in the added on time of the game, the Stars will have let off the lead as theÂ defender was on hand to scoop the ball out of the goal line which incidentally was the last opportunity for them as referee BenouzaÂ Mohamed of Algeria signalled for the end of proceedings to the delight of the sparse Ghanaian fans.LINE UP:Ghana: Richard Kingson, Samuel Inkoom, Hans Adu Sarpei, Isaac Vorsah, Lee Arday, Agyeman Badu, Opoku Agyeman, KwadwoAsamoah, Dede Ayew/Rahim Ayew, Haminu Dramani/Eric Addo, Asamoah Gyan/Mathew AmoahAngola: Fernando Carlos, Alonso Kali Carlos, Costa Fernardo Chara, Santos Zuela/Enoque Guileherme, Gilberto Amaral/Paulo BaptistaZekalanga, Felisberto, Campos Djalma, Marques Rui, Amado Flavio, Cruz Stelvio/Job Estevo Ricardo, Alberto Mabina, Alberto Mateus