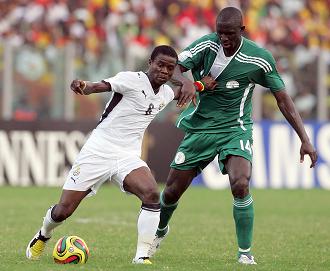 dLuanda, Angola, Jan. 27, GNA – The African continent will witness the revival of one of the age-long rivalries in football on Thursday, when the Black Stars of Ghana lock horns against the Super Eagles of Nigeria in a semi-final duel at the 11th November Stadium located at the southern part of Luanda, capital of Angola.For obvious reasons, one expects nothing but fireworks and keen contest because the outcome of any match between the two sides is a significant chapter in football history. Recent trends indicates that the Stars were responsible for the elimination of the Super Eagles from the 2008 Africa Cup of Nations hosted by Ghana and before then they had earlier hammered the Nigerians with a 4-1 margin in an international friendly game in London.Similarly, the Stars inflicted a painful 2-1 defeated on the Nigerians in the semi finals of the 1992 Africa Cup of Nations in Senegal and this remains fresh in the minds of the two teams as they march unto the pitch to do battle.These historical facts are definitely enough motivation for the Nigerians to seek for revenge to redeem their image when the two sides meet, even though the Stars are determined to maintain a clean sheet over the Nigerians.A critical analysis of the strength of the two sides in the competition, however put the Nigerians slightly ahead of Ghana taking into consideration the number of experienced players on their side as compared to the Stars, who have in their midst relatively young and inexperienced players. The likes of John Mikel Obi, Yakubu Ayigbeni, Danny Shitu, Peter Osazi Odenwengie, Vincent Enyeama, Obafemi Martins and Chinedu Obasi and a few others in the Nigerian camp, definitely rings a bell and shakes the nerves of every opponent, even though they have not lived up to that expectation in the tournament as they have failed toplay as a team. These are well established players with adequate experience and international exposure and they can becounted on to deliver on each occasion no matter the situation. Stars coach Milovan Rajevic admitted this facts when he met the press on Tuesday in Luanda, saying the Nigerians cannot be underestimated because they have what it takes to beat any team with their level of quality and experience.Coach Rajevic however seem not to be in a mood to take things for granted, saying he will not be deceived bythe performance of the Nigerians in their last game against Zambia but rather be on a cautious note in the match.The Serbian who has demonstrated his tactical prowess in the competition will be given a roll call once again to exhibit that against the Nigerians as he said every game comes with a new approach and strategy and the Nigerian game will not be an excerption.A monitoring exercise conducted by GNA Sports at the training grounds of the Black Stars gives clear indication and a confirmation of a possible change in the line up on Thursday as Anthony Annan seem to have regained 100 percent fitness for the game just as Asamoah Gyan, whilst Opoku Agyemang will not be available after taking two yellow cards in the competition.With this development, it is likely the changes will apply in the midfield department with a possible pair of Annan and Agyeman Badu, whilst Kwadwo Asamoah takes up a more offensive role alongside Gyan and Andre Ayew.These relatively unknown players will be Ghana’s trump card on Thursday as they come up against an experienced Nigerian side in a battle many see as a date with history by the Black Stars, because they will go into the history book as the side to have sent the nation into the finals of African Cup of Nations after 16 years of absence.It is definitely a date with history for the Stars and lead striker Gyan reckons this with enough conviction that they will make it a reality even though he conceded it will be a difficult task but can be accomplished.