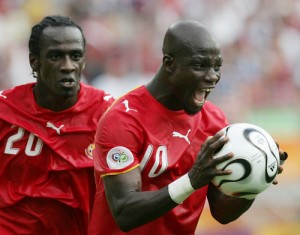 Ghana has arrived in South Africa with Milovan Rajevac expressing relief over the health status of his team.

The Black Stars touched down at the O.R Tambo International Airport in Johannesburg Monday morning before 06:00 GMT [06:00 am local time] after making the transatlantic journey from Germany the day before.

On board the flight was the squad of 23 players who were met on arrival by an advance party led by General Secretary of the Ghana Football Association Kofi Nsiah.

The team after settling in at their base will be briefed by a FIFA team on all manner of issues surrounding the tournament and what should be expected at the World Cup.

Also headshots of the players and staff for accreditation passes will be taken in the course of the day before the team’s first training session in South Africa.

The Black Stars beat Latvia 1-0 in Milton Keynes on Saturday in the last of their pre-tournament warm-up games.