Luiz Inacio LulaThe government and people of Brazil are taking advantage of the congenial atmosphere in Ghana to explore new business and investment opportunities here. 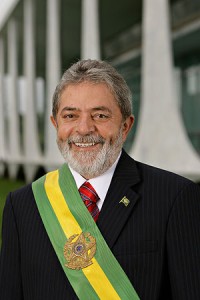 Come Monday, June 8, 2009, a powerful 100â€“man trade delegation from Brazil is expected in the country for a twoâ€“day visit.

The visit, which is being organised by the Brazilian Embassy in Ghana, will be led by the South American countryâ€™s Minister for Development, Industry and Foreign Trade, Manuel Jorge, in collaboration with the Brazilian Trade and Investment Promotion Agency (Apex Brazil).

They include 80 entrepreneurs from different sectors of the Brazilian economy, such as food and beverages, civil engineering, defense, energy and equipment amongst others, and will be in Ghana to explore areas of co-operation with their Ghanaian counterparts.

According to the Brazilian Embassy in Accra, the initiative is a direct effort by the President of Brazil, Liuz Inacio Lula, to bring Brazil and Africa closer to foster increased cooperation between the two regions, and promote sustainable development of the two continents.

The visit is expected to provide an opportunity for the group to showcase the potential of Brazilian entrepreneurs, as a force to reckon with in an emerging Third World country.

Officials say the venture is in consonance with the governmentâ€™s determination to create an enabling environment for the private sector in Ghana, and by so doing create employment for the youth in the country.

Brazil is the largest nation on the South American continent, with a per capita income of $9,700, a real growth of 5.4%, with inflation at 3.6%. Major trading partners include the US, Argentina, China, the Netherlands and Nigeria.

On the 27th of March this year, the Produce Buying Company (PBC) signed a memorandum of understanding with Erickson Ferrer da Rosa, on behalf of Sysgate Brazil Ltd, to set out the terms and conditions for the processing of good trade shea nut into shea butter for export to Brazil.

Officials say Ghana stands to benefit from the rapid technological development of Brazil, in areas of infrastructure, agriculture and manufacturing.