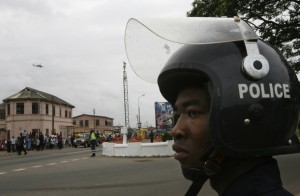 Plain-clothes Policemen and operatives of National Security have barricaded the premises of the Ghana Football Association preventing officials from entering or leaving the building.

The action is said to have been instructed by the Serious Fraud Office. A source at the SFO has told Myjoyonline.com that the office requested for certain documents from the GFA about two months ago but the FA has refused.

“We went for a court order to search and seize,” the source told Myjoyonline.com.

The SFO invited GFA President Kwesi Nyantakyi for questioning over issues relating to Glo sponsorship deal of the Premier League but he declined the invitation initially, saying the SFO had no legal mandate to invite him. He and other FA officers have since been meeting with SFO officials.

Only last week, world football governing body, Fifa, issued a statement backing the GFA president and stating that the government could only order investigations into the disbursement of money it gave to the FA but not funds from corporate bodies.

Logistics such as computers are being removed, Myjoyonline.com has learned.

GFA President Kwesi Nyantakyi who walked into the commotion was inquiring from journalists what was happening in his office. He recalled the SFO had invited his office but at a short notice and thought the GFA needed time to organise itself and respond appropriately.

He said the GFA responded in writing to the SFO, and requested for more time, however there had not been any response.

According to the FA president, aspects of the SFO’s authority to investigate the GFA is in court already and he would prefer the court to pronounce on it.

“Once somebody has encroached upon your premises whether with or without a court order, you need to find out the basis for the entry and I can even see a vehicle that has blocked our entrance. I dont know what is happening and it raises a lot of legal issues and we dont determine legal issues in the media, they are determined in the court of law so I will plead with you that let us exercise patience, let them do whatever they are doing we will also take the matter up,” said Nyantakyi.

Journalists at the FA premises say about eight computers at the GFA have been carted away, along with several files.

A group calling itself supporters of the ruling National Democratic Congress, stormed the GFA offices, albeit belatedly, claiming their objective was to stop the action of the SFO because they felt it gave the government and President Mills a bad name.