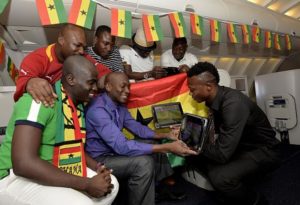 The just ended Brazil World Cup Football fever reached new heights when Ghanaian fans flying at 35, 000 feet and 600 mph were able to watch the Black Stars play a vital group match Live on board as it happened.

The specially fitted British Airways’ jumbo jet from Heathrow to Accra on Thursday (26 June) was carrying some innovative technology, which meant fans didn’t have to wait seven hours to find out who won the encounter with Portugal.

The upper Club World deck of the aircraft was transformed into the world’s highest fan zone as customers streamed the game live on their personal Wi-Fi-enabled devices, while sipping champagne and enjoying gourmet burgers from the airline’s First Class menu.

The former Ghana captain, Joe Addo, and defensive midfielder, John Paintsil, were on board to provide expert insights on the game.

Frank van der Post, British Airways managing director of brands and customer experiencestated, ‘we have this aircraft, nicknamed the ‘Jumbo Net’, on which we’re testing the technology. By happy coincidence it happened to be flying to Accra the night of the game.

They(British Airways) decided that this was a fantastic opportunity to surprise and delight some of their Ghanaian customers.

‘I’ve watched football matches in just about every conceivable place, but never thought that I’d be watching the Black Stars play Portugal at 30, 000 feet over Africa,’ Joe Addo said this onboard.

Although the specially equipped Boeing 747 is the airline’s only aircraft currently offering live streaming sport, travellers on other flights will not miss out.

Its in-flight entertainment systems also provided a choice of more than 130 movies, 650 television shows, some 550 audio albums and 225 radio shows.

The other good news for Ghanaians travelling during July is that British Airways is offering a special upgrade fare, allowing customers flying to or from Accra and London to upgrade from World Traveller to World Traveller Plus on one of the flights at no extra cost