One of Burundi’s vice-presidents has fled the country, saying he felt threatened after opposing President Pierre Nkurunziza’s third-term bid.
Burundi has seen months of turmoil since Mr Nkurunziza announced that he would be running for office again in July’s election.
Gervais Rufyikiri told France24 TV that a third term for the president would be unconstitutional.
A government spokesman denied that Mr Rufyikiri had been threatened.
There are also reports that Burundi’s National Assembly Speaker Pie Ntavyohanyuma has left for Belgium, citing medical reasons. He had also criticised the president’s bid for a third term.
Both men hold Belgian nationality.
Violent protests in the capital Bujumbura followed the 25 April announcement that Mr Nkurunziza would seek re-election.

Rights groups say at least 70 people have been killed and 500 wounded as demonstrators clashed with police over the past two months.
More than 100,000 people have fled Burundi since the start of the crisis, the UN says.
In a sign of continuing tension, four people have been injured in a grenade attack in Bujumbura.
Also, more than 100 students have climbed into the compound of the US embassy to escape from the police, who were threatening to dismantle a camp that they had set up outside the building. 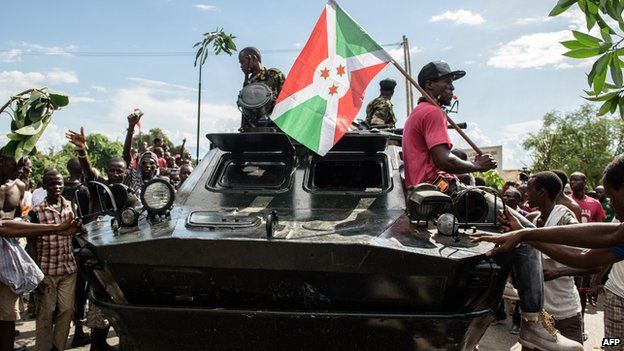