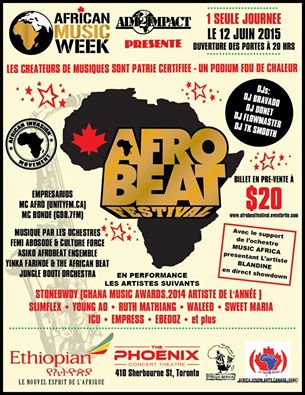 Toronto, ON (June 1st, 2015) – The inaugural AMW (African Music Week) launches in Toronto on June 9thand marks the first time an African music conference and festival is being held in North America to raise awareness and draw attention to the diversity and richness of African music, while paying attention to the business structure behind the new African music movement.  Africa’s first non-continental music conference and festival will feature some of the most sought after producers, executives and performersfrom Africa and throughout the diaspora, all of whom will converge in Toronto. African Music Week was created by the AIM 2 Impact non-profit organization to heighten the Canadian public’s understanding of African music through a series of concentrated events in Toronto. The lineup for the debut year of the AMW festival includes a who’s who of local African musical talents including:

“African Music Week is a new annual conference staged to help develop the African music industry in North America. The Afrobeats concert on June 12th will be a celebration of the best of the continents local, national and international popular music makers brought together on one scorching hot stage,” says President/Founder Julius “Julz” Ossom.

From emerging African-Canadian musicians to mid-career and seasoned veterans coming in from Africa, the US and abroad, AMW has created this week long platform to highlight multi-genre Afro-diasporic musical sounds; from Highlife to Reggae, Afrobeat to Hiplife and Afro Pop to Hip Hop. AMW aims to educate and expose both local and international African artists to the networks that will assist them in maintaining their careers in the global music industry.