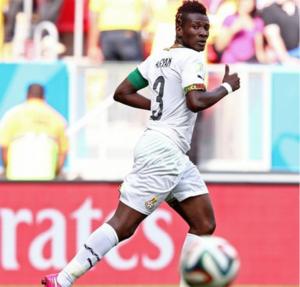 Ghana national team trainer, Avram Grant is bemoaning the absence of skipper Asamoah Gyan in the Black Stars’ upcoming two international friendly games against Senegal and Mali in France at the end of the week.

The Al Ain hitman is struggling with an injury that saw him miss his club’s games in both the Asian Champions’ League and the UAE’s Pro League over the past week.

Despite being initially named in the 22-man Ghana squad for the two friendlies against the two felllow West African countries, Coach Grant apparently had no choice than to drop his star striker ahead of the team’s gathering in Paris this week.

‘Gyan is not fully fit and so we decided to give opportunities to other players to test their mettle during the international friendlies,’ Grant toldFootball411’s Ghanaian correspondent, Russel Wiafe.

‘He is a big team player for the Black Stars and missing him is indeed a big blow for us, but this is an international friendly and not any major tournament so we decided not to risk him,” the Israeli tactician explained.

He added: ‘We are hoping that he will get well soon and start to play a part for his team and the national team because he is such a hard working guy.’ Follow @thedonplato